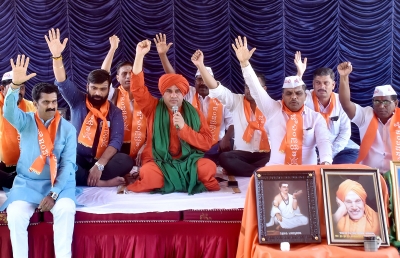 On December 29 last year, the Karnataka government had categorised Panchamasalis, a sub-sect of the dominant Lingayat community, in the newly-created 2D subdivision under the backward class (BC) category.

Yatnal had opposed the move, and urged Chief Minister Basavaraj Bommai to continue the community in the same category with a hike in the quota for them. He had even Yatnal issued a warning to the CM asking him to decide on the reservation issue for the community, depending on which the community would work out its future course of action.

After Large and Medium Scale Industries Minister Murgesh Nirani supported the government move, a war of words broke out between Nirani and Vijayapura City MLA Yatnal.

Mruthyunjaya Swami, who has launched an agitation against the ruling BJP at the Freedom Park here, said that Yatnal is in the forefront of the struggle for Panchamasali reservation.

“Though his name came up for the post of CM at one point of time, Yatnal did not take a step back from the agitation for reservation for the Panchamasali community. He has won the hearts of the people,” the seer said.

“Nirani speaks in a biased manner. PWD Minister C.C. Patil also speaks similarly. But we will not stop our agitation, we won’t listen to them,” the seer said.

After the verbal attacks by Yatnal, CM Bommai had warned the BJP MLA not to talk too much.

TN forest department to increase green cover in Nilgiris by…

Centre, Delhi govt to work together to combat COVID-19…