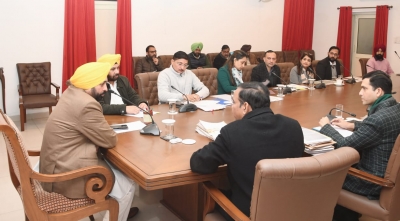 Chandigarh, Jan 14 (IANS) Punjab Chief Minister Bhagwant Mann on Saturday asked the officials to ensure that domestic flights from the Adampur airport in Jalandhar district are resumed by the coming March end.

Chairing a review meeting of the Civil Aviation department here, the Chief Minister bemoaned that the stopping of flights from the airport has caused a lot of inconvenience to the people of the region, especially the NRIs.

However, he asked the officials to ensure that the flights from this airport are resumed at the earliest. The state government is committed for restarting the flights by March end to facilitate the people.

The Chief Minister said this resumption of flights from the airport will provide direct air connectivity to the region with the rest of the globe. He said besides saving time, money and energy of the people especially the NRIs from the region, this airport will also give further boost to the economic development of the region in general and Jalandhar city in particular.

Mann said besides facilitating NRIs to stay connected with their roots, this airport will also boost medical tourism and industrial development in the media capital of the state.

Dwelling on another agenda, the Chief Minister directed the officers to complete the ongoing work for construction of civil air terminal at Halwara within three months

He said the government has already released Rs 50 crore for early completion of the work at the civil air terminal.

The timely completion of the project is the need of hour to give impetus to the economic growth of the state.

The Chief Minister said the work on this ambitious project has been hanging in fire for the last few months.

However, Mann said after assuming the charge of office, his government has put the work on this project in fast-track mode adding that any sort of inordinate delay in work is unwarranted and undesirable.

He also asked the PWD to complete the work of construction of approach roads to these airports at the earliest.

Ayushmann is a true blue Punjabi, attested by rajma-chawal…

Hema Malini, rapped over tweets, to reach Mathura at…

EU to sanction every Russian MP who voted for Donbass deal –…

England’s Dom Sibley raring to go after losing 12kg in…