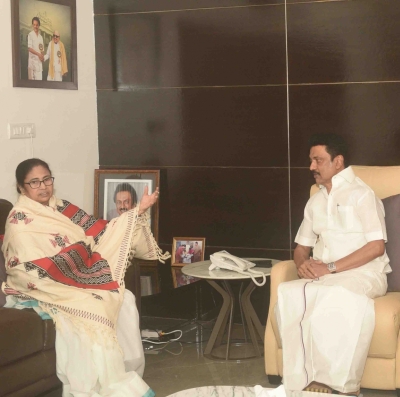 “Accidents are not always in our control. But at the same time, it has to be seen that the right organisation is given the right task. I heard the government there (in Gujarat) did not provide sufficient assistance to the victims’ families. The bridge at Morbi was allowed to be used by the public before its rennovation work was completed properly.

“This was done in a hurry keeping in mind the forthcoming Assembly elections there. Hence, I feel there should be a SC monitored probe into the matter,” Banerjee told mediapersons before leaving for Chennai on Wednesday.

The Chief Minister will be in Chennai to attend the 80th birth anniversary celebrations of the elder brother of West Bengal Governor La Ganesan.

She is also supposed to hold a meeting with Tamil Nadu Chief Minister and DMK leader M.K. Stalin in Chennai.

While talking to reporters here, Banerjee also questioned as to why central probe agencies like CBI and ED are not looking into the irregularities in the tendering process for the rennovation of the bridge.

“People’s lives are more important than politics. The manner in which the bridge was maintained was nothing but a crime,” she said.

The Chief Minister also lambasted the Centre and the BJP over the decision of the Union Home Ministry to grant Indian citizenship to Hindus, Sikhs, Jains, Parsis and Christians coming from Pakistan, Afghanistan and Bangladesh and currently living in Mehsana and Anand districts in Gujarat.

“We are totally against such decisions which are aimed at serving narrow political interests. This decision has been taken keeping in mind the forthcoming Assembly elections in Gujarat. We will not tolerate such things in West Bengal,” she said.

Gwadar to act as business hub of Pakistan: Traders

Katrina Kaif & Vicky Kaushal’s Wedding Mandap To Be A…