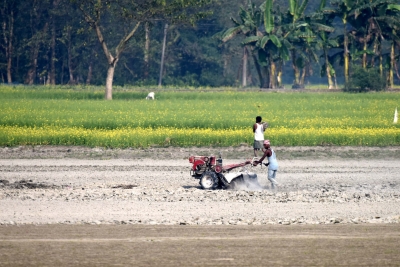 New Delhi, Nov 2 (IANS) Exports of agricultural and processed food products rose by 25 per cent during April-September period of the current fiscal, compared to the corresponding period of last year.

According to the provisional data released by the Directorate General of Commercial Intelligence and Statistics (DGCI&S) on Wednesday, the overall export of Agricultural and Processed Food Export Development Authority (APEDA) products increased to $13,771 million in April-September 2022 from $11,056 million over the same period of the last fiscal.

The export of pulses has witnessed an increase of 144 percent in second quarter of the current fiscal in comparison to the corresponding period of last year.

Export of non-Basmati rice also registered a growth of 8 per cent in the current fiscal.

It increased to $3,207 million during the April-September period of 2022-23 from $2,969 million in the corresponding period of last year.

The export of meat, dairy, and poultry products too went up by 10.29 per cent and the export of other cereals recorded a growth of 12.29 per cent in the April-September period of the current financial year.

Three from Gujarat killed in road crash in UP, three injured

UP man kills three-year-old son after tiff with wife

Female lawyer falls to death from 15th floor in Noida

UP woman bites off husband’s tongue, gets arrested

Kanye claims his song catalogue is on sale without him…

Host farmers at your house like you treated Obama: Owaisi to…

Indians must not forget message of martyred Major’s…

Logical way to stimulate demand is putting money in large…