We are here to cause an upset, asserts captain Rupert as Wales arrive for maiden Hockey World Cup 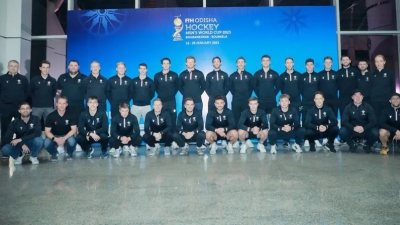 The excitement and anticipation for the mega event were evident on their faces as they made touch-down at the Biju Patnaik International Airport in Bhubaneswar on Saturday.

Head coach Danny Newcombe said, “We are really excited to come and play our first World Cup in India, it really is a privilege to be here but ultimately we are here to play hockey, playing against India in front of the Indian fans is the icing on the cake.”

The head coach also sounded off a warning to all the other teams in Pool D, which includes hosts India, Spain and England, saying that the Welsh team is not going to crumble under any kind of pressure.

“This player group is quite experienced, most of us have been together for almost six years and we earned the right to be here we are not here to just participate in the FIH Odisha Hockey Men’s World Cup 2023 Bhubaneswar-Rourkela,” he asserted.

Echoing the same sentiment, Wales’ Captain Rupert Shipperley said that his side is keen to ensure the year begins with a bang in Odisha. Wales open their FIH Odisha Hockey Men’s World Cup 2023 Bhubaneswar-Rourkela campaign against England on 13th January and play Spain on 15th January, both in the newly built Birsa Munda International Hockey Stadium in Rourkela.

“We are here to win, it’s as simple as that. We are not here to just make up the numbers, we are here to cause an upset,” said Shipperley on arriving in Bhubaneswar.

The debutants had recently played the Indian Men’s Hockey Team at the 2022 Commonwealth Games in Birmingham and had been handed a 4-1 defeat. However, according to Captain Shipperley, his side has worked on their game and is ready to take on the hosts in Bhubaneswar on 19th January at the Kalinga Stadium.

“We are looking forward to playing India in front of their fans, it is going to be a special occasion. We have faced all the teams in our pool before and we know what to expect, we are just raring to go now,” said Shipperley.

Kevin McCarthy becomes House speaker: Who he is and where he stands

Indian Idol 13: Kartik Aaryan & Kriti Sanon To Give The Best Contestant ‘Shehzada Crown’ For Their Stupendous…

Journos have no statutory exemption from disclosing their…

Bieber’s statue to be removed from Madame Tussauds