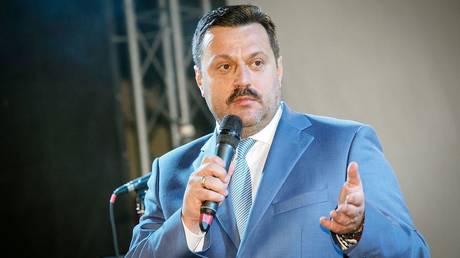 Andrey Derkach faces a seven-count indictment in relation to the purchase of two condominiums in Beverly Hills, California

The US Justice Department (DoJ) has charged the ex-deputy of Ukraine’s parliament Andrey Derkach with fraud and money laundering, after he reportedly purchased two properties in California despite being put on a sanctions list in 2020. Ahead of the US elections, he had leaked apparent phone conversations between Joe Biden and Ukraine’s then-President Pyotr Poroshenko.

In a press release published on Wednesday, the DoJ stated that Derkach, who it designates as an “active Russian agent” over his alleged “election interference” in the 2020 US presidential race, faces up to 30 years in prison for conspiracy to violate US sanctions, bank-fraud conspiracy, money-laundering conspiracy, and four counts of money laundering.

Derkach has previously denied working for Moscow or interfering in US elections.

Prosecutors claim that since 2013, the former MP and an unnamed accomplice devised a scheme to buy and maintain two “luxury condominiums” in Beverly Hills by using money withdrawn from foreign accounts and intermediaries within the US in order to conceal Derkach’s involvement in the purchase. It’s claimed that the former parliamentarian bought one of the properties for himself and the other for his children.

Andrey Derkach is a former deputy from the pro-Russian ‘Party of Regions,’ which was at one point the largest party in Ukraine and ruled the country until the Maidan coup in 2014. He was sanctioned by the US after he leaked alleged phone conversations between former Ukrainian President Pyotr Poroshenko and then-presidential candidate Joe Biden. The phone exchanges related to the investigations of the Ukrainian gas company Burisma, where Biden’s son Hunter held a lavishly compensated seat on the board. US intelligence services have yet to publish any factual evidence supporting Derkach’s ties to Moscow, but have said they have “high confidence” he was working at the behest of the Kremlin.

“The conduct of this Kremlin asset, who was sanctioned for trying to poison our democracy, has shown he is ready, willing and capable of exploiting our banking system in order to advance his illicit goals,” stated US Attorney Breon Peace, adding that the US will not be a “safe haven where criminals, oligarchs or sanctioned entities can hide their ill-gotten gains or influence our elections.”

While the DoJ notes that Derkach “remains at large,” Peace vowed that the US will use all the tools at its disposal to prosecute anyone who tries to evade sanctions and abuse the US financial system.

What quantity of water can Mullaperiyar dam withstand, SC…