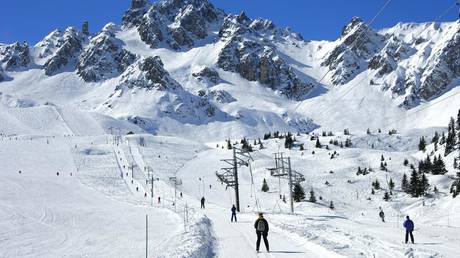 French police detained at Kiev’s request Ukrainian billionaire Konstantin Zhevago at the lavish Alpine ski resort of Courchevel on Wednesday. The businessman and former MP is wanted at home in connection with a major money laundering and embezzlement case.

Ukraine’s State Bureau of Investigations (SBI), which was the first to announce the arrest, said it had “worked hard” to detain the billionaire, having reaching out to 38 other nations to seek their aid in apprehending Zhevago. The detention eventually came following “several months” of “close interaction” with the French police, gendarmerie and judiciary, it added.

A French court is expected to rule later on Wednesday about whether Zhevago will be placed in custody while Kiev prepares the necessary documents for an extradition request, the SBI said.

At home, the businessman is accused of embezzling $113 million from Ukraine’s Finance and Credit Bank, thus harming the interests of the state and the bank’s clients. He is also facing money laundering charges in Ukraine, according to law enforcement.

Ukraine had already seized Zhevago’s assets, including “shares of his enterprises worth hundreds of millions of hryvnas” and 26 real estate properties. He was also one of the businessmen whose assets were nationalized by Kiev in November.

Zhevago was the main beneficiary of Finance and Credit Bank, one of the largest lenders in Ukraine before 2015, when it had its banking license withdrawn. He is also the founder and majority shareholder of the Swiss-based commodity trading and mining company Ferrexpo, which claims to be “the third largest exporter of iron ore pellets in the world.” The company owns iron ore mines in Ukraine.

The billionaire was also a long-time Ukrainian MP. He occupied a seat in the country’s Verkhovna Rada for over two decades between 1998 and 2019.

According to Forbes, Zhevago is still the fifth richest person in Ukraine, although his net worth fell from $2.1 billion to $1.4 billion in 2022.

Ukrainian billionaire Konstantin Zhevago has been arrested in France at Kiev’s request over an embezzlement case Read Full Article at RT.com

Burn Your Belly Fat with this one Tip How to Quickly Reduce Belly Fat? | Lose Belly Fat Faster

Happy to be in quarterfinals but really want to go further…

Bharti Axa unveils plan to secure health and life amid…