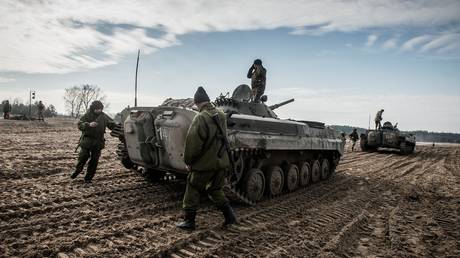 Slovakia has given 30 BMP-1 infantry fighting vehicles and will receive German tanks as replacements, the defense minister said

Slovakia has sent dozens of BMP-1 infantry fighting vehicles to Ukraine in exchange for a promised delivery of armor from Germany, Defense Minister Jaroslav Nad has announced. Bratislava has a record of sending outdated military hardware to Kiev while receiving NATO-compatible replacements.

The two nations agreed on the weapons swap in the summer, Nad said on social media. Slovakia is to get 15 overhauled Leopard 2A4 battle tanks, complete with ammunition, spare parts, and training, in exchange for the Soviet-era hardware it’s donating to Ukraine.

Now Slovakia has fulfilled its part of the bargain it expects the German tanks to start arriving as soon as next month and for the deal to be completed throughout 2023, the minister noted. Leopard tanks will significantly strengthen Slovakian capabilities and help it build a NATO-standard heavy mechanized brigade, he explained.

Nad thanked his German counterpart, Christine Lambrecht, for “excellent coop” in a tweet announcing the scheme on Tuesday.

Slovakia, as part of Czechoslovakia, was a former Warsaw Pact member that joined NATO in 2004. It previously sent some other military hardware to Ukraine in exchange for Western replacements. In April, Prime Minister Eduard Heger announced it was giving a soviet-era S-300 air defense system to Kiev, after the Slovakian military deployed US-made Patriot missiles with the help of German and Dutch troops.

NATO states have been arming and training Ukrainian troops since a coup in Kiev in 2014. The assistance was dramatically ramped up ahead of the Russian offensive in Ukraine, which Washington and its allies claim to be unprovoked.

The massive draw of weapons and ammunition has reportedly depleted the stockpiles of sponsor nations. According to a New York Times report last week, 20 out of 30 NATO members are “tapped out” in terms of the equipment they can deliver to Kiev.

Ukrainian Foreign Minister Dmitry Kuleba told Politico on Monday that backers of his country “have to think how we will be fighting the battles of tomorrow” and “begin the production of necessary weapons today,” claiming that this would allow Ukraine to win on the battlefield.

Rediscover Goa with Airbnb in collaboration with Goa Tourism Department

Pakistan’s Shadab Khan out of New Zealand tour with…