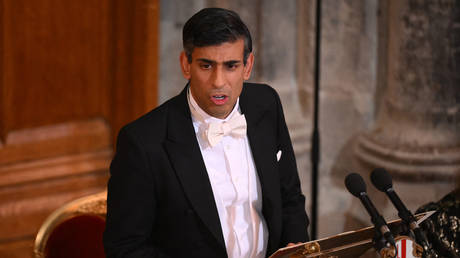 Rishi Sunak says the days of close economic cooperation with Beijing are over, as the country poses a challenge to London’s interests

The British prime minister has said the period of burgeoning trade with China, based on mutual economic interests, is now over. Rishi Sunak described Beijing as a rival, while pledging to avoid a “simplistic” confrontational approach.

Delivering an address at the Lord Mayor’s Banquet in London on Monday, Sunak said: “Let’s be clear, the so-called ‘golden era’ is over, along with the naive idea that trade would lead to social and political reform.”

The term he used was an apparent reference to remarks in 2015 by then-chancellor George Osborne, who echoed the Chinese ambassador’s characterization of British-Sino relations as having entered a “golden era.”

The prime minister stressed that re-evaluating ties does not mean Britain will embrace “simplistic Cold War rhetoric” in dealing with what he described as a “systemic challenge to our values and interests.”

He went on to accuse the Chinese leadership of becoming increasingly authoritarian.

To illustrate his point, Sunak cited the Chinese authorities’ response to ongoing anti-lockdown protests across the country, saying Beijing “has chosen to crack down further” instead of addressing people’s grievances.

However, the premier said that despite the difficulties, the UK cannot “simply ignore China’s significance in world affairs – to global stability or issues like climate change.”

Sunak pledged to bolster Britain’s relations with like-minded nations, particularly “friends in the Commonwealth, the US, the Gulf states, Israel and others,” saying details of this deeper cooperation will be revealed next year.

The British prime minister stressed that ensuring the country’s “economic security” and resilience is one of his cabinet’s main priorities. As an example, he cited the government’s recent decision to block the £63 million ($76 million) sale of semiconductor manufacturer Newport Wafer Fab to the Chinese-owned firm Nexperia, as well as the banishing of Huawei’s 5G network from the UK.

The premier concluded by calling on the UK to “do things differently” and not to “choose the status quo.” This, Sunak argued, will help ensure that British values will prevail despite growing competition from powers such as China.

The British prime minister says the “golden era” in relations with China is over, with Beijing posing a challenge to London’s interests Read Full Article at RT.com

‘No cowards in the Australian team’: Cummins breaks silence on Langer’s claim

All those raising slogan of ‘Jai Shri Ram’ not sages: Rashid…