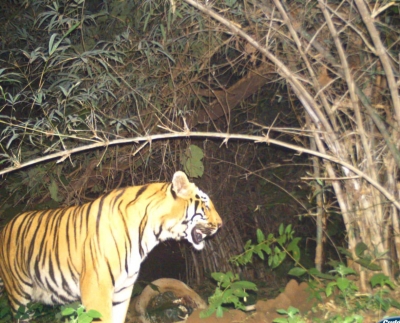 Patna, Jan (IANS) Two persons, including a minor girl, sustained injuries after they were being attacked by a tiger in Bihar’s West Champaran district, officials said on Tuesday.

The victim, Sonam Kumari, 7, a resident of Sirisiya village under Naurangia police station, went to a nearby field on Monday night to bring some grass, and was attacked by a tiger roaming in the area. When she shouted for help, Subhash Mushar, who was working in the same agricultural field, rushed at her help. The tiger also attacked him, leaving him injured.

Following the attack, a large number of villagers assembled at the place and the tiger disappeared.

The victims were admitted in a sub-divisional hospital for treatment and they are out of danger. The local villagers claimed that the tiger may have strayed from the adjoining Valmiki Tiger Reserve (VTR) and came into the residential area.

In October last year, a man-eating tiger was killed in West Champaran district by sharp shooters hired by the state Forest Department. That tiger had killed 11 persons in the region.

Here’s The Pathaan Trailer That You All Have Been Waiting For!

Dav Whatmore takes charge at Baroda as Director of Cricket

Kamala Harris is source of inspiration for many around the…