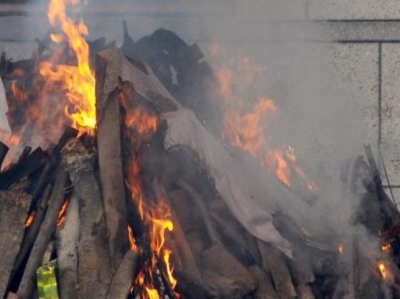 A pall of gloom descended on the Sarnon Ka Tala village after the tragic incidents.

Sumer and Sohan, 26, were cremated on the same pyre on Thursday.

Sumer Singh, who used to work in Surat, lost his balance and fell from terrace while he was talking over phone on Tuesday. He was rushed to hospital where he died during treatment.

On Wednesday, his body was brought to his native village.

Sohan Singh, who was preparing for Grade II teacher recruitment exam in Jaipur, was called home on the pretext of his father Babusingh’s ill health.

On Thursday morning, when Sohan Singh had went to fetch water from a tank, 100 meters away from the house, he fell into the tank. When he did not return home for long, the family members searched for him and were shocked to find his body in the tank. Later, villagers fished out Sohan’s body.

Villagers told the media that the two brothers had a strong bond. They finished their studies together.

Sumer Singh was not good in studies but he encouraged Sohan to study hard and get a teacher’s job, the villagers added.

‘Disturbing that Sachin & Co have 1 year left in…

Pakistan against preconditions in Afghan-Taliban talks