‘The Crown’ cast detail excitement ahead of Season 5 premiere 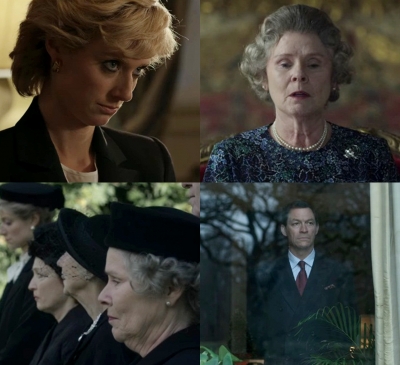 London, Nov 9 (IANS) As the Season 5 of ‘The Crown’ is set to launch, top-billed cast members, including Imelda Staunton, Jonathan Pryce, Dominic West and Elizabeth Debicki, gathered at a press conference to discuss the royals, the roles and their anticipation for audiences to watch the show.

Staunton, who takes over the role of Queen Elizabeth II from Olivia Colman, said she felt “quite excited” for the season to finally be released on Netflix on Wednesday, reports ‘Variety’.

“This is a working week for me, I’m filming [season 6] in the morning,” she said. “But I think we’re very excited because I think we do feel extremely proud to be part of it, but proud of what we’ve done in this fifth series.”

“I second that,” said Pryce, who plays her husband Prince Philip, a role he inherited from Tobias Menzies.

“I’ve not seen all of it, unlike lots of journalists around the world, but I’m looking forward to seeing how well I did,” he quipped.

The actors also discussed how it felt to be joining the long-running series, which sees the entire cast replaced every two seasons.

“We’re sort of riding on their wave of success in a way,” Staunton said of the show’s crew, including the production designers, costume and make-up departments. “I mean, I was doing a scene yesterday and I cannot tell you the detail that went into giving me breakfast, it was absolutely extraordinary. And [in] every department, no one’s going, ‘Oh that’s fine. They won’t see it.’ No one does that. It’s absolutely got to be to the nth degree correct. And that’s one part and then, of course, (showrunner) Peter Morgan investigates the emotional part – that’s another area. But costume, make-up – it’s all just the top drawer and also we want to live up to that and serve it well.”

Lesley Manville, who plays the Queen”s sister Princess Margaret (taking over from Helena Bonham Carter in the previous two seasons), said: “You start out, you’re on your own, (you’ve) got this character to create and the baton’s being passed on.”

“So you do all that homework by yourself, but then the last three or four months building up to starting to shoot, it’s all of those layers that get put on with these brilliant departments. And for me, I could start to see Margaret when I started to work with hair and makeup and with wardrobe.”

Pryce added that the entire cast being new was also helpful.

“I think it’d be really difficult if you were the only one coming into a long-running series. But we get that sense of support from each other.”

Elizabeth Debicki, who steps into the iconic shoes of Princess Diana (previously portrayed by Emma Corrin), admitted she was “definitely” nervous when she took on the role.

“The show does feel like an enormous responsibility,” said Debicki. “It took me some time to understand that you’re bringing your interpretation to Peter’s interpretation of this person. But then the people watching the show come with such attachment and memory and a sense of ownership, too, over these characters in a way, not only from the people who have played them before, but also from their living memory and their history. So you have to leave a kind of space for that, and it’s sort of a dance between all those things. And it’s a beautiful process, but it’s also very challenging.”

Johnny Lee Miller, perhaps best known as Sherlock in ‘Elementary’, said that having grown up in a “very socialist household” he had initially had pre-conceived ideas about his character, Conservative Prime Minister John Major, especially having been in his 20s during Major’s administration in the early 1990s.

“As a youngster at the time, a young man, we thought we knew who John Major was and what he was about and he got a lot of flack back in the day,” Miller explained.

“The more I learned about him, the more I began to like him and we had a lot of similarities. We’re from the same part of the world. We both went to state grammar schools. We had theatrical parents. So I had all these things in common. I’m [like] ‘Oh my gosh,’ and then the more you learn about the work that he did, and my respect for him grew massively.”

Dominic West, who plays Prince Charles during one of the lowest periods of the royal’s popularity with the British public, following his divorce from Diana and the revelation of his affair with Camilla Parker Bowles, said he hoped his portrayal of Charles would give viewers a new perspective on the man who is now their monarch.

“It was a divorce, and there’s always two sides in a divorce,” West said of Charles’s split.

“I suppose viewers saw and heard one or other and hopefully there’s a bit of perspective now and I hope everyone gets a fair hearing. I think that’s part of the reason for doing it. And I obviously love the guy and I’ve never heard it put so well as Johnny just did about you have to start falling in love with a character but actually you do and inevitably you take their side or you give them the benefit of the doubt and I hope that will maybe happen when people see Charles on this.”

Asked why, out of Europe’s numerous royal families, the British royals continue to inspire such fascination, the cast discussed their real life counterparts’ enduring popularity. Miller joked “Because they’re the best” while West light-heartedly suggested it was because they had “the best clothes.”

“Obviously, the world sees them in public events and all the pomp and finery that goes with it,” said Pryce.

“But European royal families don’t have the same lifestyle. I mean, they mostly live as ordinary people, use public transport and have jobs. Ours don’t. Their job is being the royal family. There’s a kind of mystery to it.”

West added that the Queen’s state funeral two months ago also served as a helpful reminder as to just why the British royals inhabit a unique place on the global stage. “We saw it at the Queen’s funeral,” he said, referring to the pomp and grandeur.

“Nowhere in the world does anyone do theatre like that.”

16 lakh UP govt employees to strike on Tuesday