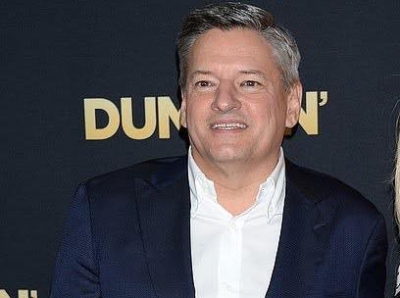 Los Angeles, Nov 9 (IANS) The cast and crew of ‘The Crown’ were joined by Netflix head Ted Sarandos in London for the show’s Season 5 premiere.

Before the screening started, Sarandos took to the stage at the Theatre Royal Drury Lane in central London on Tuesday evening to introduce the new season. During his speech, Sarandos called the series the “crown jewel” in Netflix’s original series catalogue, reports ‘Variety’.

“This really has been and continues to be the highlight of my personal and professional life,” Sarandos said of the show. “And I’m incredibly in awe with (Peter Morgan’s) vision and with his writing. And I am incredibly, incredibly grateful for your friendship. Peter, thank you so much.”

Sarandos also took the opportunity to remind the audience the show is a “dramatisation” of the Royal Family’s life. There has been much debate in the UK about how much of the show is fictionalised and whether it should carry a disclaimer so as not to confuse audiences, with actor Judi Dench even accusing the series of “crude sensationalism” in an open letter to the Times.

Jonny Lee Miller, Imelda Staunton, Dominic West, Elizabeth Debicki, Jonathan Pryce and Lesley Manville were also in attendance, joining Morgan on stage despite being right in the middle of filming the sixth (and supposedly final) season.

Morgan added: “We’re filming in the morning. We’ve been filming for 10 weeks I think. Another 30 to go.”

For Pryce, who takes over the role of the Queen’s husband Prince Philip, the theater brought back memories of the West End premiere of ‘Miss Saigon’, which had opened at the Theatre Royal Drury Lane in 1989, with Pryce playing the Engineer.

“It’s great being back in Drury Lane where I was 32 years ago for the opening of ‘Miss Saigon’,” he said, revealing that at the same time he had been performing on stage Miller had been working as a clerk in the same building.

“In the auditorium, selling programs and ice cream, was Jonny Lee Miller,” Pryce said to cheers from the audience.

They replace the previous cast, which included Olivia Colman as the Queen, Tobias Menzies as Prince Philip and Helena Bonham Carter as Princess Margaret, who played the characters for the previous two seasons. The current cast will remain with the show for its sixth season.

Along with Sarandos, another red carpet surprise arrived in the form of Gillian Anderson, despite the fact she doesn’t appear in the current season.

Anderson played former Prime Minister Margaret Thatcher in Season 4 and was previously reported to be in a relationship with “The Crown” showrunner Morgan.

Abdalla used his red carpet moment to highlight the case of British Egyptian writer Alaa Abd El-Fattah, who has been imprisoned in Egypt for almost a decade, by writing “Free Alaa” on his hand, which he held up to photographers.

Once inside the theater (which makes a cameo in the new season of the show in a scene where a lonely Diana watches the ballet), the cast, crew, family, friends and journalists assembled to watch two episodes from the new season, reports ‘Variety’.

“It is such a thrill for us to get to work with the greatest talent here, to explore British storytelling around the world to an audience that is hungry for it and that loves it,” Sarandos said before the top-billed cast walked on stage.

“And there’s no better example of that than ‘The Crown.’ I remember almost 10 years ago, the first meeting, when Peter Morgan and (producer and director) Stephen Daldry had this incredible meeting, when they came and pitched the idea for ‘The Crown.’ Now, it was ambitious for sure, but it was perfectly clear.

“Peter pitched 10-episode seasons that would be a cinematic drama — the production design, casting, writing, more fitting of feature film — obviously where they were quite accomplished already. And the idea that we would re-cast every two seasons, these were all at the table 10 years ago, the ideas for the show, and it came in pretty much exactly as they hoped to do it.”

“But these are the stories that shaped this country during Queen Elizabeth’s 70-year reign. There was so much talk about our giving a two-season order for aHouse of Cards’ back then. But it really set the stage beautifully for this six-season commitment to excellence that became ‘The Crown.’

“So since ‘The Crown’ premiered back in 2016, it is — pun intended — the crown jewel at Netflix, and we’re incredibly, incredibly proud. I know that the last couple of weeks there has been a lot of talk about ‘The Crown.’ Tomorrow, when people get to see it, the talk is going to be about how magnificent this new season is.”

Rashmika Mandana opens up about receiving negativity and hatred

‘The Crown’ cast detail excitement ahead of Season 5 premiere

UP: More than 20 cars ram into each other in Baghpat due to…