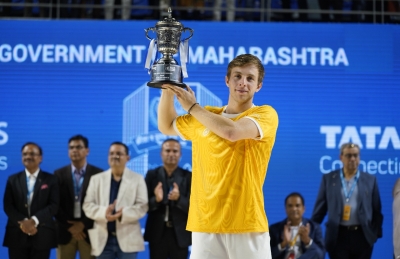 Pune, Jan 7 (IANS) Tallon Griekspoor of the Netherlands came back from a set deficit to overcome World No, 60 Benjamin Bonzi of France in three hard-fought sets in the men’s singles final of the Tata Open Maharashtra, becoming the first player since Marc Andrea Huesler at Sofia in 2022 to win his first tour-level title in his maiden appearance in the final, here on Saturday,

This was the first ATP Tour final featuring both first-time finalists since 2022 Munich and both Griekspoor and Bonzi gave it their all to treat the capacity crowd at the Centre Court in the Balewadi Stadium to a thrilling encounter.

After losing the first set, Griekspoor came back strongly to win the match 4-6, 7-5, 6-3 in two hours and 16 minutes at the Shiv Chhatrapati Sports Complex here. The World No. 95 fought hard for each point and exhibited a world-class level of energy and athleticism. Bonzi on the other hand made unforced errors at a crucial juncture and allowed his Dutch opponent to take control of the match after losing a hard-fought second set.

The 26-year-old Griekspoor had made it to the final by beating Aslan Karatsev in straight sets in the semifinal while Bonzi got the better of another Dutch player, Botic van de Zandschulp.

In the final, Griekspoor served superbly and sent down 17 aces as compared to 11 by Bonzi, as both committed four double faults apiece. Griekspoor saved three out of four break points while Bonzi could manage only 4 off 7.

Things did not start well for the Dutch star as the 26-year-old Bonzi broke away from 4-4 in the first set earning the crucial break in the 10th game, winning five successive points across games 9 and 10, capitalising on two double faults served by Griekspoor. He had three break points and converted the second to win the first set

Griekspoor fought back superbly in the second set as the games went with serve til 3-3 when the Dutch player put Bonzi under severe pressure before the French player won a marathon game, which saw advantage applied three times, to hold his serve. At 5-5, Griekspoor put Bonzi under pressure once again and this time managed to break his serve on the second set point in another long game. He held his serve in the next game to win the set 7-5.

Griekspoor took control of the decider and did not allow Bonzi many chances. He broke Bonzi in the third game, warding off the French player’s attempts to gain back the break before breaking him again in the ninth game to seal a memorable maiden ATP Tour title.

‘PM hasn’t got enough chances to speak in…