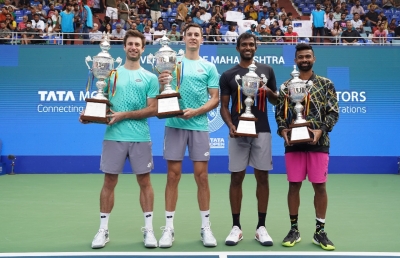 Balaji and Jeevan, who had come into the main draw as alternates after the late withdrawal of Laslo Djere and Alex Molcan of Slovakia, played superbly throughout the week as they stormed into the men’s doubles final without dropping a set.

But on Saturday, their magical run came to an end when they lost to the Belgians 6-4, 6-4 at the Centre Court at the Balewadi Stadium here. The Belgians earned an early break in both sets which was enough for them to seal their sixth ATP Tour title as a team.

The Belgian duo seeded fourth here, had stormed into the final by beating top seeds and reigning U.S Open champions Rajeev Ram of the United States and Joe Salisbury of Great Britain in the semifinals on Friday night.

The Indian team had reached its first ATP Tour final as a team after first teaming up at the 2007 India F7 and made their tour-level debut at the 2012 Chennai. Balaji and Jeevan had shocked No. 2 seed Nathaniel Lammons and Jackson Withrow earlier in the quarterfinals.

The Tamil Nadu-born duo has a 3-3 tour-level record as a team and wanted to become the second consecutive all-Indian team to win Pune after Rohan Bopanna/Ramkumar Ramanathan won in 2022.

However, the Belgian combination of Gille and Vliegen proved too strong for the Indians as it used its greater experience of playing on the ATP Tour to great effect.

Gille and Vliegen attacked Jeevan’s service in the third game of the first set and earned an early break. They then held their service to take a 3-1 lead. Games went with serve and though Balaji and Jeevan tried a lot, they could not get the break back as the Belgians won 6-4.

In the second set, Gile and Vliegen broke Balaji’s serve in the third game to take a 2-1 lead. They maintained their advantage till the end of the set to win 6-4, winning the final and the title in 70 minutes.