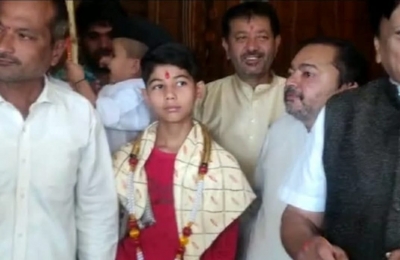 Hubballi (Karnataka) Jan 14 (IANS) The garland gifted to Prime Minister Narendra Modi by a minor boy during his recent road show here has been sent to the Forensic Science Laboratory (FSL) for testing, police said on Saturday.

According to sources, the garland was subjected to detailed analysis at the FSL to ensure that it did not contain any harmful chemical and poisonous substances.

However, the tests have confirmed the absence of harmful or suspicious substances in it. A report in this regard has been submitted to the state police department and the Special Protection Group (SPG).

The boy, Kunal Dhongadi, had breached security to garland the Prime Minister. Later, he had described PM Modi as god. “He is not an ordinary human being. I am his fan and want to meet him” he said.

He further stated that he is in love with PM Modi and wanted to take a closer look at him. “I want to invite him home. I am inspired by his speeches. I had come to see PM Modi with my grandfather, uncle and a two-and-half-year old child. We had got the RSS dress for the kid,” he said.

“We wanted the child to garland the PM Modi but it could not happen. So, I initiated to garland PM Modi and I also wanted to shake hands with him. But, the police prevented me,” he said.

Former legislator Ashok Katawe stated that the boy was an energetic person. There is no violation with PM Modi’s security due to his act. He is a die hard fan of PM Modi. However, he made a mistake by breaching the security of PM Modi.

He should be pardoned. The boy doesn’t have an idea about police security, sensitivity of the issue and consequences, he added.

Union Minister for Parliamentary Affairs Pralhad Joshi stated that there will be huge security cover for the PM. The boy had breached the security to garland PM Modi. According to our information, he did it out of love for the PM.

Twitter wants to lure back advertisers with free ads – WSJ

Pakistan set to bow to IMF’s demands as forex reserves drop to a paltry $3.08 billion

UK premier steps down after 6 weeks in power

Public’s disappointment with Kiwis’ showing in…

Assure of no concerns in this regard: Health ministry over…