SA20 is going to be an important moment for South African cricket, says Jos Buttler 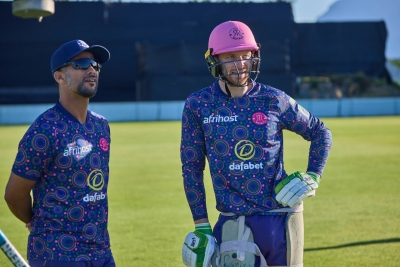 Newlands, Jan 7 (IANS) Paarl Royals will be kickstarting their SA20 campaign on Tuesday, and their star wicketkeeper-batter, T20 World Cup winning captain Jos Buttler believes the team is “capable of winning the tournament”.

“If you look through the team, there’s some fantastic players in there, but then it’s very much down to how we play and get the best out of ourselves and click as a unit. I’m really excited to play under David Miller’s leadership and I’ve played with him a fair bit — the Royals also know him well and we’re looking forward to him leading us,” he said.

“There’s JP Duminy as head coach, he’s someone who I’ve played against a few times and I’m really looking forward to working alongside him. I think we have some great experience and some fantastic young players as well, so it’s a nice blend,” added Buttler who has played at Boland Park twice before with his national team.

Sharing his thoughts on what South Africa’s new explosive T20 league can bring to the home nation, Buttler said, “I think leagues like the SA20 are very much at the forefront of cricket and are also paving way for the future of cricket. In my opinion, the IPL is the biggest and the best cricket tournament in the world, because of the kind of eyeballs it brings to the game. And similarly, it’s really important for South African cricket to have so many IPL teams being associated with the SA20.”

He continued, “I think franchise cricket brings the best players from the international teams and the best local talent together, and gives the domestic players an environment to thrive and flourish in. With the youngsters getting that opportunity to rub shoulders with the best in the world, it’ll leave a really positive impact on the development of South African cricket and help pave a stronger environment where there is accelerated learning. So, I see the SA20 as a really important moment in South African cricket’s history.”

Summing up the last year which consisted of some incredible hitting, memorable tons and some valuable titles, Buttler said, “I was really happy with the way things obviously went in 2022. I had my best IPL season by far with the Royals, and we were disappointed not to lift the trophy, but we had a fantastic season. As a group, I think we had a really experienced and balanced team. Personally, I found some fantastic formulas and a really good mindset, and I was really pleased to contribute with the runs.”

“And then of course, the highlight very much was becoming a T20 World Cup winner with England. It’s a big moment in my career having taken over the captaincy, and to top it off with a win in a World Cup, and to make England a team holding both the 50-over and 20-over World Cups at the same time is an amazing achievement. So, it’s been an amazing year. But now we’re at the start of a new one. Hopefully there’s some more good things in 2023,” added England’s white-ball skipper.

Having scored more than 1500 runs at a strike rate of 154.65 across international and domestic T20s, Buttler was in the form of his life, and credits a few factors. “I think it’s a few things that have helped me get there. I think the change in my batting position in T20 cricket, moving to the top has given me more opportunity to be consistent. But certainly, my experiences over the years have really shaped me. There’s been a lot of learnings, a lot of understanding of my own game, and I’ve also taken some really valuable pieces of advice from people that have worked well.”

Pakistan-India talks on Indus water likely in US in April