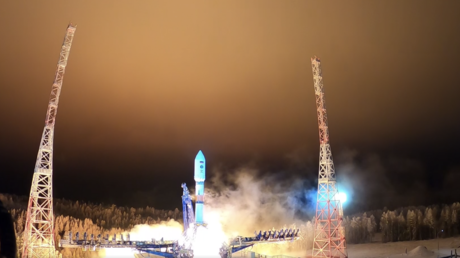 The Russian Defense Ministry has acquired a new space asset, launched on Monday on a Soyuz-2.1b rocket from the Plesetsk Cosmodrome in the country’s far north.

The Russian military did not specify the nature of the craft, stating only that it was put into orbit without incident, with the designation Kosmos-2564. All Russian military space satellites are labeled “Kosmos” in public databases regardless of their purpose.

“At the predetermined time, a Fregat upper stage placed the spacecraft into its intended orbit, after which ground control systems of the Space Forces took charge of it,” the statement said.

The ministry released footage and images of the launch.

The previous launch for the Russian Defense Military was reported on November 2, also from the predominantly military Plesetsk facility in Arkhangelsk Region.

A similar event took place on October 22, when two military satellites were placed into orbit by a single Soyuz rocket.

The Russian Defense Ministry has announced the launch of a new spacecraft, designated Kosmos-2564, into orbit Read Full Article at RT.com

US shuns limits on nuclear weapon use

Modi versus Maharashtra’s ‘Gang Of Four’