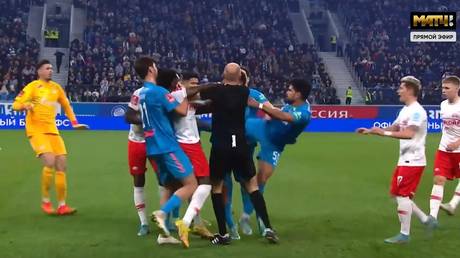 Six players were sent off as the Russian Cup game between bitter rivals Zenit St. Petersburg and Spartak Moscow descended into chaos on Sunday.

Brazilian Zenit defender Rodrigao then became involved, appearing to lash out at Spartak forward Shamar Nicholson, who responded by throwing a punch.

All hell broke loose as referee Vladimir Moskalev struggled to contain the two sets of brawling players and members of the respective benches.

By the time the dust had settled, Moskalev had dished out red cards to Zenit’s Rodrigao, Barrios, and Malcom, and Spartak stars Nicholson, Aleksandr Sobolev, and substitute goalkeeper Aleksandr Selikhov.

Zenit won the match 4-2 on a penalty shootout after the scores had ended 0-0 at full-time at the Gazprom Arena.

Despite the defeat, Spartak still finished top of Russian Cup Group B to reach the playoffs, while Zenit ended third in the group and will need to negotiate a regional playoff path.

The game, however, will be remembered far more for the ugly scenes of violence which will surely be investigated further by the Russian football authorities.

High alert in Jim Corbett park ahead of Diwali

It’s snowing in Shimla: These pics will leave you…