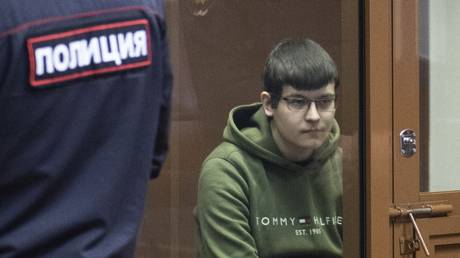 A court has sentenced Timur Bekmansurov, who was convicted of carrying out a mass shooting at the State University in the city of Perm, to life behind bars. The attack left six people dead and 47 injured, 23 of whom received gunshot wounds.

The Perm Regional Court found that on September 20, 2021, Bekmansurov – then a first-year student at the university – entered the campus grounds holding a rifle and opened fire. The judge concluded that the 19-year-old poses a threat to society and should thus spend the remainder of his life in prison.

The ruling comes after almost four months of court proceedings, during which relatives of the deceased and victims demanded Bekmansurov be handed a life sentence – a punishment also sought by the prosecution.

The young man will serve the first five years of his sentence in prison, and the rest in a penal colony with a special regime. Additionally, he will also have to satisfy the claims of the families of the dead and wounded and has promised to do so using his disability pension and the salary he will receive in the colony.

The defendant previously admitted his guilt for the crimes but asked for a lighter sentence, pointing to a mental condition, his positive references from his place of residence and study, and his willing cooperation with the investigation. He also argued he should not receive a maximum life sentence due to being disabled – during his arrest Bekmansurov received a gunshot wound below the knee and doctors had to amputate part of his left leg.

As reported by Perm regional news portal 59.ru, during the hearing, the judge referenced the conclusions of experts that Bekmansurov has a tendency to aloofness, manipulative behavior and suicide. They also concluded that he is distrustful of others and emotionally cold. At the same time, they pointed out that the 19-year-old does not suffer from any psychological conditions and had not been bullied by his peers or relatives.

Before committing the mass shooting last year, Bekmansurov published a delayed message explaining his preparation for the heinous crime, stating it was his dream to commit it by any means possible, and noting that his motivation was not political or religious and that he was not a terrorist.

The Perm State University shooter has received life in prison after he killed six people and injured over 40 in a massacre last year Read Full Article at RT.com