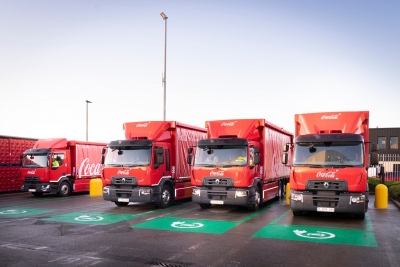 Coca-Cola has already started operations with its new electric vehicle (EV) trucks in Belgium while Pepsi is still building up its Megacharger station, reports Gizmochina.

Both Renault and Tesla’s long-haul EV trucks mark their arrival into the heavy-duty segment of the electric vehicle industry.

The E-Tech D et D Wide model Renault trucks released to Coca-Cola in Belgium have a likely lesser range than the Tesla Semi.

According to Renault Trucks, the vehicle was specially created to handle Coca-Cola’s logistical data on deliveries.

Additionally, they include a clear door on the passenger side, 360-degree camera systems to prevent bind spots, and loudspeakers to warn cyclists and pedestrians, the report said.

Tesla CEO Elon Musk has repeatedly broken his commitment to introduce the Semi since 2017.

But this year, it is anticipated to make its debut with 15 trucks to Pepsi, its first client, by December 1.

Earlier, Renault Trucks had also mocked Musk on Twitter about the release of the Semi.

‘Players Aren’t On Holiday’, Dravid Hits Back At Gavaskar…

Trump ‘will walk out’ if North Korea talks not…

‘Can’t Bat, Poor With DRS’ Fans Wonder How Many Chances…

Ventilators to India will prove to be life savour for many…