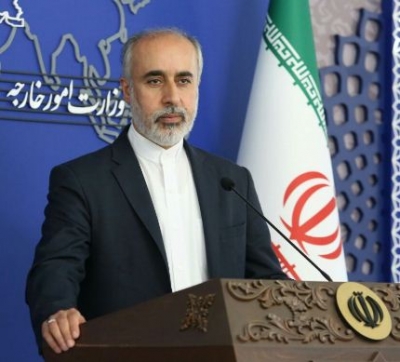 Kanaani made the remarks on Thursday in a post on his Twitter account after it was reported on Wednesday that Eutelsat had informed Press TV of its plan to remove the 24-hour Tehran-based English language network from its list of channels.

The French company said it made the decision because of the EU’s sanctions on the Iranian network over alleged “rights violations” during the recent unrest in the country, Xinhua news agency reported.

In a statement released on Wednesday, Press TV called the Eutelsat action “media terrorism” against Iran, denouncing the EU for its hypocrisy on the freedom of expression.

The EU sanctioned some Iranian institutions and individuals, including Press TV, on November 14 over what it called “Iran’s widespread use of force against peaceful protesters”.

Protests have erupted in Iran after 22-year-old Mahsa Amini died in a Tehran hospital on September 16, a few days after her collapse at a police station. Iran has accused the US and some other Western countries of “inciting riots and supporting terrorists” in the country.

DiCaprio gets attacked by radio host over rumoured teen romance

Salma Hayek had the ‘Magic Mike’ strippers over to her home

Kiara, Sidharth shake a leg on dhol beats before entering his Delhi home

Anne-Marie back with new single ‘Come Over’ with…

Made report card of work done in my constituency, says…