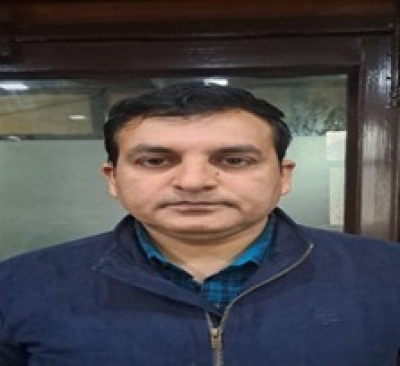 New Delhi, Jan 14 (IANS) The Economic Offences Wing (EOW) of Delhi Police has arrested a former assistant vice president of the RBL bank for allegedly transferring Rs 19.80 crore from bank’s two accounts to his own accounts in other banks.

The accused, identified as Nagendra Kumar (39), had also resigned from the bank after committing the crime in August 2020, and he was evading arrest.

According to Jitendra Kumar Singh, Additional Commissioner of Police (EOW), a complaint was filed by the vigilance department of the RBL bank wherein it was stated that Nagendra, was posted at RBL Bank at Barakhamba Road as Assistant Vice President, Implementation & Client Support – Transaction Banking.

“On August 7, 2020, two account holders of the bank disputed some debit transactions from their accounts through the Cash Management portal of the bank. On further enquiry, the bank came to know that Nagendra transferred Rs 19.80 crore from two bank accounts to his own accounts with ICICI Bank and HDFC Bank. The RBL Bank contacted ICICI Bank Ltd and HDFC Bank Ltd and returned the cheated amount to the victims accounts,” said the official.

However, a case was registered under relevant sections of the law and a manhunt was initiated to nab Nagendra, who was on the run.

“Several efforts were made to trace the accused. Based on technical surveillance, Nagendra was apprehended on Friday from Vasant Kunj,” said the Additional CP.

Police said that Nagendra had permissions to read and write in the host to host banking system (Secure File Transfer Protocol) of the bank regarding bank accounts from which the money was transferred.

On August 7, 2020 at about 05.18 p.m., Nagendra created two funds transfer files having eight transactions and uploaded them to the folder of these companies in a host to host banking system (Secure File Transfer Protocol).

“After that the cash management system of the bank automatically sent these files for payment, Rs 6.9 crore was transferred to the account of Nagendra but the same was returned by ICICI bank on the request of the bank while Rs 10 crore was not accepted by HDFC bank as the beneficiary name mismatched while Rs 2.90 crore was not transferred as the daily limit was breached,” said the official.

“After transferring the cheated amount from the bank account holders he left the bank after sending an email of resignation on the same date at 05.44 p.m.,” the official added

US announces first transfer of Russian seized assets to Kiev

Sydney Sweeney Once Bewitched Us With Her Hypnotic Looks In A Mini Dress Looking Like A Mermaid On Land! Disney Cast Her…

Turkey allows Iraqi Kurdish forces in Syria to fight IS