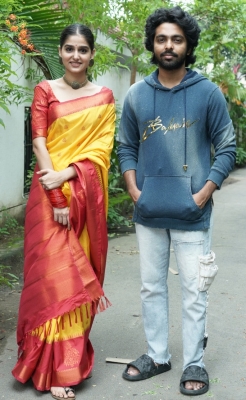 Chennai, Nov 8 (IANS) G.V. Prakash Kumar dons the role of a loving uncle to his on-screen niece in his latest cinematic outing. The young National Award-winning actor and music composer, and Oscar-winning maestro A.R. Rahman’s nephew, has been paired with Anaswara Rajan in this film helmed by Udhay Mahesh.

The yet-to-be-titled Tamil film is about the emotional bonding between the uncle and his six-year-old niece. Shooting for it commenced on Tuesday in Chennai.

Kavithalaya, a production house floated by legendary filmmaker K. Balachander, is home to many powerhouse talents and blockbuster, trend-setter movies. It has joined forces with OTT platform Disney+ Hotstar to produce the movie.

Udhay Mahesh, who has helmed films such as “Naalai” and “Chakra Vyugam” and acted in several hit films and webseries including “Family Man-2” and “Office”, has written the story, screenplay and dialogues for this film produced by Pushpa Kandasamy and Kandaswamy Bharathan.

Anaswara Rajan made her acting debut in the Malayalam short film “Globe”. Her first feature film was “Udaharanam Sujatha” (2017). She gained popularity because of the commercially succesful Malayalam films “Thaneer Mathan Dinangal” (2019) and “Super Sharanya” (2022). She has also participated in shows as a singer and is popular among children.

Hesham Abdul Wahab, who has worked as music director for a number of Malayalam hits. including “Hridayam”, has written the musical score and U.K. Senthilkumar is helming the cameras. Parvathy Meera is penning the songs and G.N. Murugan is behind the stunt choreography.

‘Kuldeep has to find solution for himself’