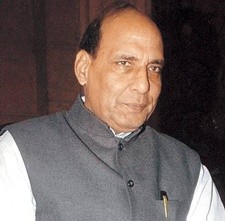 New Delhi, Jan 1: A group of youths, who claimed they were members of the NSUI and the Youth Congress on Wednesday staged a protest near BJP president Rajnath Singh’s residence here, police said. The two organisations said they had nothing to do with it.

The protesters marched towards Rajnath Singh’s Ashoka Road residence in the heart of national capital, but were stopped by police a few hundred metres away.
Police used batons to chase away the protesters.

However, a spokesperson for the National Students’ Union of India (NSUI) denied any involvement of the Congress-affiliated students’ organisation in the protest.
The protest comes a day after Bharatiya Janata Yuva Morcha (BJYM), the youth wing of the Bharatiya Janata Party, Tuesday protested near Rahul Gandhi’s residence demanding removal of Himachal Pradesh Chief Minister Virbhadra Singh, who has been accused of graft.

Documentary on US veterans psychedelic drug use in the works

Dehradun Airport all set to get makeover to handle more…

Database of 5.5 crore farmers will be increased to 8 crore…

Birthday gift for mother in law from Amazon that are both…