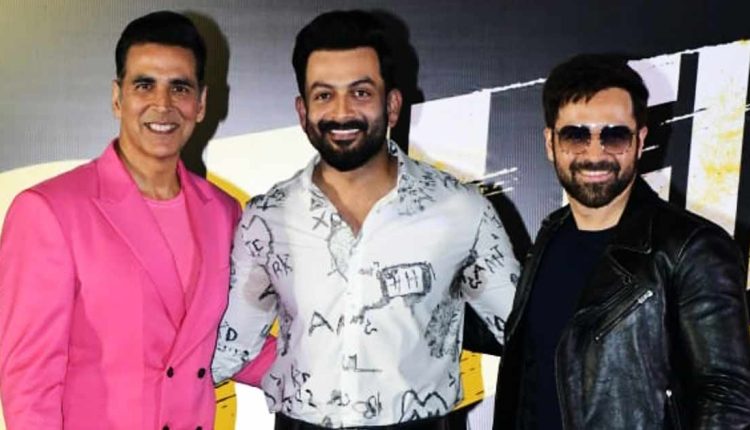 ‘Selfiee’ is a special project for the Malayalam cinema star Prithviraj Sukumaran. The film marks his foray as a producer in Bollywood after a very successful stint down south.

‘Selfiee’ is the remake of Prithviraj Sukumaran’s 2019 Malayalam hit ‘Driving Licence’ which was directed by Jean Paul Lal.

Prithviraj Sukumaran was all smiles on the stage at the recent launch of the ‘Selfiee’ trailer. The film stars Akshay Kumar, Emraan Hashmi, Nushrratt Bharuccha, and Diana Penty and is directed by Raj Mehta.

Speaking about the film, Prithviraj Sukumaran said: “As someone who was very closely associated with developing the original material, I kind of know from where it began, how it took the form of ‘Driving Licence’ and how it became ‘Selfiee’ today.”

“I would give full credit to our director Raj for seeing the original and thinking that this film is possible from that source of material, which indeed requires a lot of talent especially to be able to tell a story differently but still retain the core elements of it and still make you feel what the original made you feel.”

Talking about how this film happened, Prithviraj added: “One person I would love to pick out and thank is Akshay sir. He is the reason why this film happened, I called him one day and I told him I would like for you to watch one of my films because I believe it is a story that needs to be told everywhere in the country and the rest is history.”

Prithviraj Sukumaran has a busy year ahead with projects like ‘Salaar‘ with ‘KGF‘ director Prashant Neel, ‘Bade Miyan Chote Miyan’ with Ali Abbas Zafar and his own directorial venture ‘L2: Empuraan’ lined up.

The post Prithviraj On Driving License’s Journey For Becoming Selfiee: “I Called Akshay Kumar & Told Him…” appeared first on Koimoi.

Shazam! Fury Of The Gods, Aquaman And The Lost Kingdom, Barbie & Nun 2 – Theatrical Line-Up Of Warner Bros. Pictures In 2023

Oxygen injections to protect you from air pollution