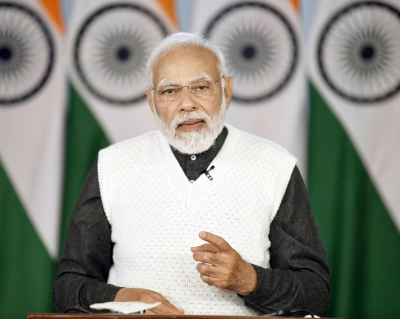 Addressing the valedictory session of the three-day conference of states’ chief secretaries on Saturday, Modi emphasised that to build a developed India, the country is focussing on four pillars of infrastructure, investment, innovation and inclusion.

He asked the chief secretaries to take steps to make the MSMEs “global champions” and a part of the global value chain.

“The entire world is looking up to India to bring stability to the global supply chain,” the Prime Minister said.

He also highlighted upon the development of both physical and social infrastructure along with focus on enhancement of cyber security.

Launching the ‘Aspirational Block Programme’, the Prime Minister underscored the success achieved in various aspirational districts in the country under the Aspirational District Programme.

He added that the Aspirational District model should now be taken up to the block level in the form of Aspirational Block Programme.

For the preparations related to G20 meetings in the states, the Prime Minister stressed on the importance of involving common citizens.

He said that creative solutions should be envisaged for achieving such ‘Citizen Connect’. He also suggested setting up of a dedicated team for preparations related to G20 summit.

Modi also cautioned the states on the challenges posed by drugs, international crimes, terrorism and disinformation originating from foreign soil.

The second edition of the chief secretaries’ conference had begun on January 5 in the national capital, while the Prime Minister was present during the deliberations held on January 6 and 7.

Dos and don’ts of baby skincare for first-time parents

108 Buddhists from Republic of Korea on a 43-day pilgrimage

Covid cases in India could be 17 times more: Study