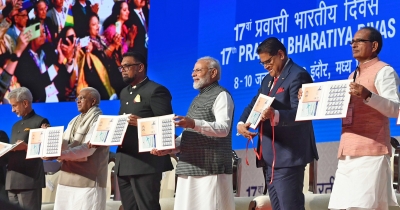 Bhopal, Jan 10 (IANS) A day after Chief Minister Shivraj Singh Chouhan apologised for shortage of space for some overseas citizens that saw that kept out of the Pravasi Bharatiya Diwas inaugural ceremony in Indore, the opposition Congress on Tuesday attacked the ruling BJP, alleging that a tussle between administration and the BJP led to an “embarrassing” moment for Madhya Pradesh.

The Congress also took a dig at the BJP, claiming that the political tussle between Chief Minister Chouhan and State Home Minister Narottam Mishra came to the once again.

“Political tussle within the BJP has intensified in way that even state’s prestige wasn’t kept in mind and minister in-charge Narottam Mishra wasn’t involved in preparation for such large international event. On the direction of the CM, a bunch of officials did not take minister-in-charge of Indore in confidence. Several NRIs were denied entry into hall for inaugural session, it is a matter of concern and should be be investigated,” former minister Verma said.

1st Test: Labuschagne, Smith to the rescue as Australia reach 76/2 at lunch

Janhvi Kapoor On Getting Trolled For Whatever She Does, Reveals People Tag Her ‘Nepotism Ki Bachchi’

Russia explains how West wants to destroy its economy