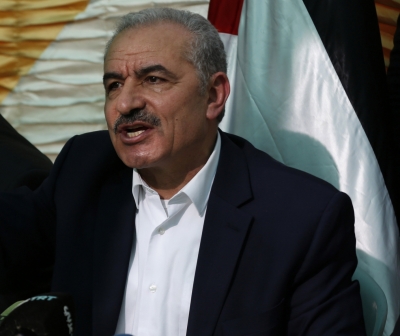 Ramallah, Nov 28 (IANS) Palestinian Prime Minister Mohammed Ishtaye has accused Israel of seizing two-thirds of the Palestinian groundwater and diverting it into its cities and settlements.

He made the remarks at a media briefing ahead of the Fourth Arab Water Conference on Sunday organised by Palestine under the slogan ‘Arab Water Security for Life, Development and Peace’, according to an official statement.

An average Israeli consumes 430 litre of water per day while a Palestinian only consumes 72 litre, much less than the global average of 120 litre, the Palestinian Prime Minister noted.

After 1967, “Israel began digging water wells in the West Bank deeper than the Palestinian ones, which led to its control of most of the groundwater and the drying of the springs,” Ishtaye added.

Such Israeli measures have affected the transformation of the agricultural pattern in Palestine, he said.

Israel has yet to respond to Ishtaye’s allegations.

Water is one of the major issues between Palestinians and Israelis in their peace negotiations that have been stalled since 2014.

Gujarat Candidate Breaks Down After Getting 1 Vote, Turns…

Saeed not to go underground following US bounty