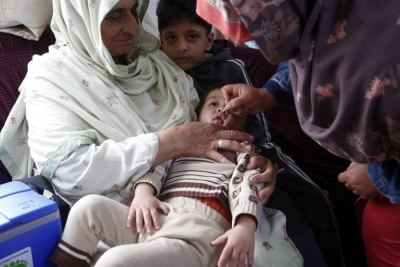 Islamabad, Nov 28 (IANS) The Pakistani Health Ministry has launched the third anti-polio vaccination campaign of the year from Monday to vaccinate 13.5 million children under five years of age in 36 districts of the country.

A total of 20 polio cases have been reported in Pakistan this year. All the reported cases were in Khyber Pakhtunkhwa province. However, the presence of poliovirus has been detected in other parts of the country as well, Xinhua news agency reported.

More than 100,000 trained and dedicated health workers would be engaged in the vaccination drive to inoculate the targeted children at their doorstep, according to the Ministry.

UP: BJP MP’s ‘unidentified’ driver booked after his car mows down boy

Clashes, arrests after protest against migrant centre near…