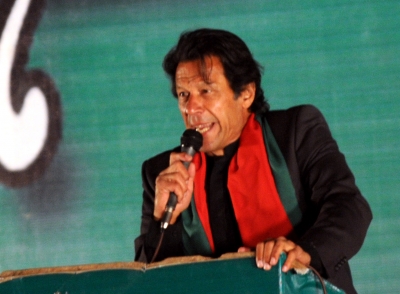 Fawad Chaudhry was arrested by the police from Lahore during the wee hours of Wednesday on charges of threatening the CEC, Samaa TV reported.

The FIR was filed against him for a speech where he had allegedly said that the status of the Election Commission of Pakistan is the same as that of a “secretary” and the “Chief Election Commissioner signs documents like a clerk”, the report said.

The former minister was arrested shortly after he held a press conference in Lahore, where he threatened the members of the Election Commission of Pakistan and their families with repercussions if “those involved in the May 25 incident” were appointed (in the Punjab caretaker setup) or retained in their positions.

He also reported to have lodged a formal complaint with the ECP against the appointment of those directly involved in the crackdown in Punjab.

He strongly criticised the appointment of Mohsin Naqvi as Punjab’s caretaker Chief Minister and stated that “those who are being appointed as the caretaker of [Punjab] government will be followed until they are punished”.

Over his arrest, Imran Khan tweeted, “Fawad’s arrest on his apt description of the CEC leaves no doubt in anyone’s mind that Pakistan has become a banana republic devoid of rule of law.”

He urged people to stand up for their fundamental rights to save Pakistan’s drift toward a point of no return, Samaa TV reported.

Juventus suffer 1-2 defeat to Fiorentina in Serie A