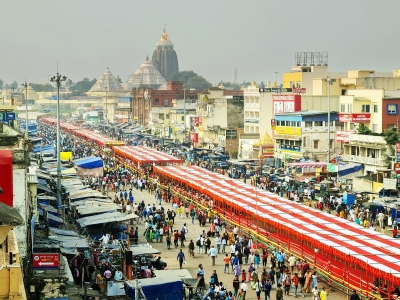 Bhubaneswar, Jan 14 (IANS) Odisha Governor Ganeshi Lal’s statement in favour of entry of foreigners into Jagannath temple, Puri, has sparked a debate in the state.

While addressing inaugural function of Odisha Vision 2036 Conclave in Bhubaneswar on Thursday, the Governor had said, “If a foreigner can meet Puri Gajapati, Puri Shankaracharya Swami Nischalananda Saraswati and servitors, he/she should get a chance to pay obeisance to Lord Jagannath.”

Stating the governments should work on this issue, Lal said, “This is my personal opinion… someone may appreciate it or not, but, I request the servitors, Puri Shankaracharya and king Gajapati to consider my proposal.”

As per tradition, only Hindus are allowed to have darshan of Lord Jagannath and siblings inside the Puri temple. So, this statement of the Governor has created a fresh row in the state.

Puri temple servitors have opposed the proposal of the Governor. Temple servitor and member of the Jagannath Temple managing committee, Madhab Chandra Mohapatra said, “It is laughable. The proposal is beyond our imagination. It is not possible. Nobody other than Hindus should be allowed into the temple.”

Another servitor Shyama Mohapatra also made a similar opinion. Lord Jagannath and his siblings come out of the temple each year during Rath Yatra to give darshan to such (foreign) devotees. So, the age-old tradition should not be changed, Mahapatra said.

Similarly, the BJP and Congress party leaders have expressed their opinions on the proposal of the Governor.

Leader of opposition in Odisha Assembly, Jayanarayan Mishra (BJP) left it to the pandits of Mukti Mandap to take decision on this issue while Congress MLA Suresh Routray said the tradition should not be broken.

Somy Ali Once Wanted To Marry Rajesh Khanna; Reveals, “My…

Tiger Shroff gets his colleague a film role

Hospital in Wardha shows quality healthcare can be…