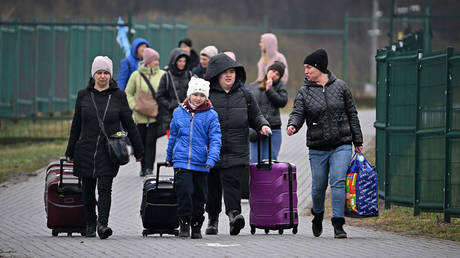 950,000 people are registered as such, with the total number of Ukrainian nationals in the country exceeding two million, a senior official has said

Nearly a million Ukrainian refugees are now residing in Poland, Bartosz Marczuk, vice president of the Polish Development Fund, revealed on Tuesday. He estimated Warsaw has spent at least $8 billion to support Ukraine in 2022.

In a series of tweets, Marczuk offered a detailed look into the refugee situation in Poland in light of the Ukraine conflict. According to his data, “there are 950,000 refugees in Poland now, which is over 400,000 below the summer peak.”

Marczuk stated that Poland has also become home to another 1.2-1.3 million people from Ukraine who had moved there before the hostilities broke out in late February.

The total number of Ukrainians in Poland amounts to about 2.3 million, he added.

Meanwhile, the official continued, 90% of the refugees are women and children, making up 2.5% of the population of the country.

While in Poland, Ukrainian refugees receive social benefits, including education allowances. Meanwhile, 65% of school-age children are enrolled in local institutions, while 50% of preschoolers are attending kindergartens, he noted, suggesting that some students may be taking online classes. The Polish authorities spend some 200 million Polish Zloty ($45 million) per month on these efforts, he said.

However, Warsaw has to bear other expenses as well. “In 2022, Poland made serious efforts to help Ukraine,” he said, adding that it had allocated 35-40 billion zloty ($7.9-9 billion) for supporting Ukraine. The sum includes security assistance, private aid, allowances from the budget, local governments, and NGOs.

However, he pointed to a “very high employment rate” among refugees of working age, with about 320,000 people having a job. In the near future, this will enable billions of zloty to be generated for the budget from taxes and contributions from refugees’ salaries alone, Marczuk claimed.

In October, Poland proposed tightening the rules and depriving Ukrainians of financial assistance if they leave the country for more than a month. The government has also announced that starting next year, refugees living in state accommodation centers for longer than 120 days will have to start paying for their housing and food.

Lionel Messi can stay with me if he signs for Real Madrid:…

UPSC CSE Main 2021 exams to be held on schedule: Commission