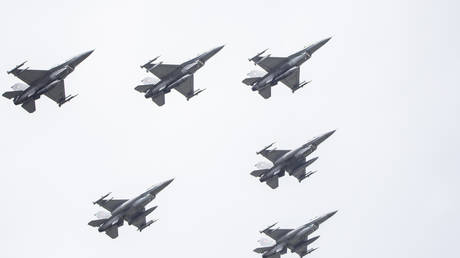 NATO leaders are considering a possible a U-turn on providing Ukraine with advanced fighter jets, James Stavridis, retired supreme allied commander and US Navy admiral, claimed in an op-ed published by Bloomberg on Tuesday.

According to Stavridis, the bloc could send fighter jets such as Soviet-designed MiG-29s, which are currently in use in Poland, as well as US surplus F-16s, which he describes as “simple-to-learn multi-role fighters.”

The retired admiral also suggested that the West will eventually oblige Ukrainian President Vladimir Zelensky’s request to help close the country’s airspace and provide an increased number of high-end air-to-surface missile systems, as well as and Israeli-made Iron Dome and NATO Patriot batteries.

While Stavridis did not clarify where the information on such plans comes from, his op-ed was published on the same day that NATO foreign ministers are convening in the Romanian capital Bucharest, to discuss future assistance to Kiev amid its conflict with Moscow.

NATO Secretary General Jens Stoltenberg opened up the forum by once again calling on member states to provide more military support to Ukraine “for as long as it takes,” and insisting that Russia must not be allowed to win on the battlefield.

The West has so far refused to provide Kiev with any fighter jets, over concerns that such a move could be interpreted by Moscow as a declaration of war. Some states have also pointed out that donating such equipment to Ukraine would leave their home territories defenseless.

Israel has also been reluctant to supply Kiev with its Iron Dome missile defense system, arguing that it simply does not have the production capacity to provide such systems to Ukraine.

Moscow, meanwhile, has repeatedly warned the West against “pumping” Ukraine with weapons, insisting that it only serves to prolong the conflict and cause more unnecessary bloodshed.

Man arrested for threatening to blow up Rajasthan CM Ashok…

Could relate well with script of ‘Pink’: Andrea