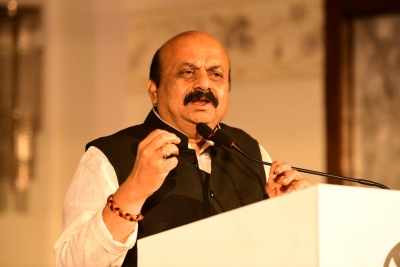 Bengaluru, Jan 7 (IANS) Karnataka Chief Minister Basavaraj Bommai released a logo and mascot of the National Youth Festival to be held in Hubballi-Dharwad from January 12.

In a function held virtually on Saturday, Bommai thanked the Government of India for allowing Karnataka to host this year’s National Youth Festival and Khelo India University Sports meet. The state has made all arrangements to host the Youth Festival on a grand scale.

On the occasion, a discussion on the arrangements for the event was held, and it was decided to hold a meeting of young legislators, MPs and other elected representatives. The Railway Board agreed to attach special coaches for the youths coming to Hubballi-Dharwad from different parts of the country.

Union Minister Anurag Thakur appreciated design of the Youth Festival’s logo and mascot through the competition.

The logo prepared by Bansilal Ketki of Odisha was selected and she will get a cash prize of Rs 50,000. This national flower, Lotus inspired her to prepare the logo which will convey nationalism, selfless service, unity and cooperation. It will also represent India’s progress in economy, foreign affairs, the upgradation of the Indian army, G-20, and the chairmanship of the United Nations Security Council.

Similarly, Inbam of Bengaluru who has created ‘Champi Chikka’, was selected as the mascot and he will get a cash prize of Rs 50,000. This has the design of an elephant and it will show that Karnataka has the highest number of elephants in the country.

It will also showcase global climate change, achieving the goal of sustainable development, and world peace, and the rapid strides of India and its youths in the fields of sports, startups, creativity, and education.

The theme of this year’s Youth Festival is ‘Vikasit Yuva, Vikasit Bharath’, and over 7500 delegates from all over the country are expected to participate in this event. Prime Minister Narendra Modi will open this festival in Hubballi on January 12 to coincide with the birth anniversary of Swami Vivekananda.

US suspected airstrike kills 15 in Syria

How the Covid-19 pandemic has left 97% of Indians poorer…