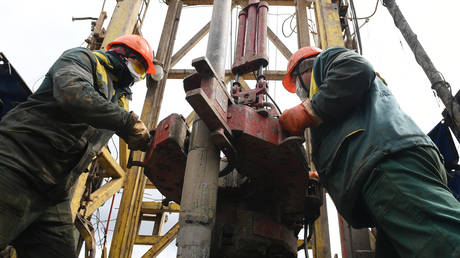 Russia has a principled pro-market stance, while Western restrictions will cause underinvestment in the sector, a deputy PM said

A price cap on Russian oil could cause shortages and disrupt investment in the energy sector, Deputy Prime Minister Aleksandr Novak has warned. Moscow will strictly observe its commitment to market principles in international trade, he added.

“Our position is pretty rigid here, and I have voiced it on many occasions. Regardless of what level is picked for the price cap, even if it is high, it will be unacceptable in principle in terms of signing contracts. We will work under market conditions,” Novak told a business forum on Tuesday, according to Russian media.

The deputy prime minister blasted the US and its allies for trying to impose various restrictions on Russia’s energy industry, blocking its access to technologies and stifling Russian international trade. Such actions “come with great risks” and may cause deficits and underinvestment, he said.

“This would be true for any commodity that Western nations may want to impose their rules on in the future,” Novak predicted.

G7 nations agreed to impose a price cap on Russian crude in September, with enforcement set to begin on December 5. The EU is negotiating its own version of similar restrictions, with Poland reportedly standing in the way of an agreement by pushing for a lower cap level. Shipments of Russian crude that don’t comply would be denied insurance and other services by companies in Western jurisdictions, according to the plan.

Western officials believe Russia will still sell under the new terms, but would be denied windfall profits amid the global energy-price hike. However, Novak and other top Russian officials have said the country will not accept any cap.

Novak’s remarks came during the Russian-Chinese Energy Business Forum, an event organized by the governments of the two nations every year since 2018. Chinese Vice Premier of the State Council Han Zheng read a statement from President Xi Jinping during the event, in which the Chinese leader described energy as a “cornerstone of practical cooperation” between the two nations.

“China intends to build closer partnership with Russia in the energy sphere, foster development of clean and ‘green’ sources of energy, jointly defend international energy security and stability of supply chains, and contribute to the long-term reliability of the international energy market,” the message read.

Russia became the biggest supplier of oil to China after EU nations chose to cut trade with Moscow as a form of punishment for its role in the Ukraine conflict. Beijing disapproved of Moscow’s decision to send troops into its neighboring country in February, but blamed the US and the expansion of NATO in Europe for triggering the hostilities in the first place.

China ‘warned away’ US warship

Christians’ execution by IS: Egypt reserves right to…

Lopez wants to move in with Chmerkovskiy?

Upcoming Nothing Phone (1) will not launch in US

Chris Hemsworth shares why his wife and family didn’t…