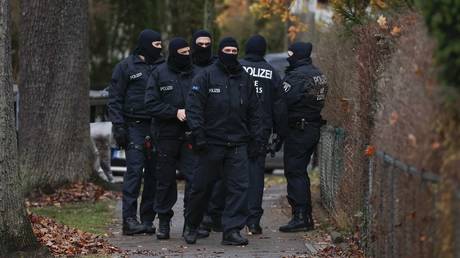 Police in Germany are planning new arrests as they continue to probe a suspected coup plot by a group allegedly planning to overthrow the government in Berlin by force.

While more than 130 searches and 25 arrests were carried out on Wednesday, the number of suspects in the case has now risen to 54, Holger Muench, head of the Federal Criminal Police Office, told the ARD broadcaster on Thursday. Muench said the figure could rise further as the investigation continues.

The suspects, many of whom are members of the Reichsbuerger ‘Citizens of the Reich’ movement, are accused of planning to install a regime similar to the German Reich of 1871. The group allegedly wanted to install aristocrat Heinrich XIII Prinz Reuss, the scion of a noble family from Frankfurt am Main, as the head of the new state.

“We have a dangerous mixture of people who are following irrational convictions, some with a lot of money, others in possession of weapons and a plan to launch attacks and expand their structures,” Muench told ARD.

Police also raided the Waidmannsheil hunting lodge in the state of Thuringia on Thursday, which is owned by Reuss. Authorities suspect the neo-Gothic 19th century lodge, topped with a turreted tower and battlements, may have served as a weapons depot and meeting point for the coup plotters.

One officer who spoke to Reuters on the condition of anonymity said police had worked through the night, looking for evidence of weapons and explosives.

The town’s deputy mayor, Andree Burkhardt, also told Reuters that locals had been sent letters informing them that their passports issued by the legitimate German authorities were no longer valid.

“All citizens of Bad Lobenstein received a letter this past summer in which we were told that we were not German because our passports were not German,” Burkhardt explained.

“We were then given the opportunity to apply for our German origin documents with the Reuss administration. This of course provoked a huge outcry among the population,” he added.

Among those arrested on Wednesday included former members of the military and police forces, as well as a former representative of the Alternative for Germany (AfD) party in the Bundestag and a Russian national.

Police in Germany are planning more arrests as they investigate a suspected plot to overthrow the government in Berlin Read Full Article at RT.com

Merkel’s ‘confession’ may be grounds for tribunal – Moscow

Kenya ramps up efforts to curb HIV infections among youth

Bengal to send officers to Singapore for training

Face masks and no hugging for returning Premier League fans