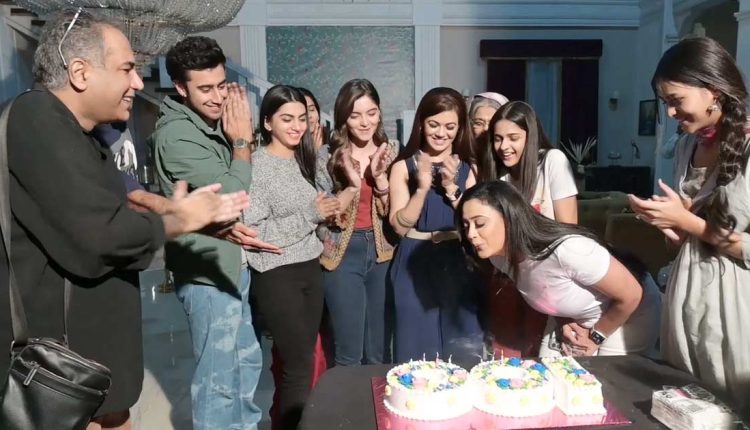 Zee TV’s fiction show Main Hoon Aparajita – which focuses on the journey of Aparajita (Shweta Tiwari), a doting mother of 3 daughters, preparing them for the rollercoaster called life after her ex-husband Akshay (Manav Gohil) finds love outside of the marriage with Mohini (Shweta Gulati).   Ever since its first episode, the various ups and downs of Aparajita’s family have undoubtedly struck a chord with the audience while the constant twists and turns have kept the curiosity alive.

With immense love pouring in from the audience, the cast and crew of the show recently celebrated their first milestone as the show completed 100 episodes. Even though the entire cast and crew have been working nonstop to entertain their fans, the Main Hoon Aparajita team took a break recently and celebrated the 100th episode.

To celebrate the wonderful milestone, the cast and crew of the show came together for a small cake-cutting ceremony followed by numerous selfies moments with the behind-the-scene heroes of the show. The celebrations definitely hinted at the achievement and pride the entire team felt at marking a century!

Karishma Sharma Rubbishes Andrew Tate’s Claims Of ‘Hooking Up’, Calls Him A Scumbag & Reveals “His Texts On Instagram Were Inappropriate”
Taarak Mehta Ka Ooltah Chashmah’s Makers Eyeing To Stays In The Top 10 On The TRP List, Look Forward To Getting Missing Characters Back

As Shweta Tiwari mentioned, “We’ve gotten an overwhelming amount of love and appreciation from our audience so far for Main Hoon Aparajita. This milestone would not have been possible without their endless support. In fact, it seems like it was just yesterday when we started shooting for the show, can’t believe we have hit 100 episodes already.”

She continued, “Our viewers have shown us some incredible love, especially towards our characters, and I hope that this love will continue for a long time. My love for playing Aparajita continues, as I am looking forward to exploring new aspects of my character and entertaining our audience. I look forward to celebrating many more milestones in the near future with my team.”

While the team had a gala time as the show completed 100 episodes, a lot of drama is set to keep the viewers engaged in the upcoming episodes. In the latest episode of the show viewers witnessed a major twist where Akshay was seen trapped in a deep freezer truck. Will Akshay be able to discover that it was Veer who locked him in the truck? Will Veer and Chhavi marry each other? What will Aparajita do next to save her daughter?

Tune into Main Hoon Aparajita, every Monday to Sunday at 7:30 pm, only on Zee TV!

Must Read: The Kapil Sharma Show: Gaur Gopal Das On Being In Love, Heartbroken & Says “Thank God I Don’t Have To Sing Channa Mereya” Making Everyone Laugh

Samantha Gives A Savage Reply To A Troll Who Said She Lost Her Charm Amid Divorce & Myositis: “I Pray You Never Have To Go Through Months…”

Women can offer ‘namaz’ in mosques: AIMPLB to SC

8 injured after bus crashes into daycare centre in Canada

NATO must not be part of Russia-Ukraine conflict: German Chancellor

6 killed as ambulance crashes into truck in Bangladesh

Bangladesh knock India out of U-19 Asia Cup

Vandersay makes Test debut for Sri Lanka at 32; Head in…