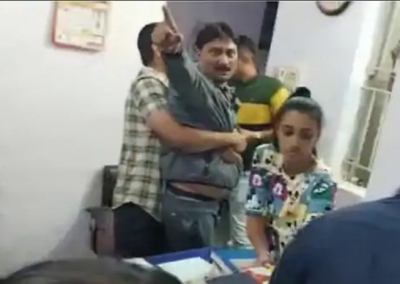 After the police action on Tuesday night, the family members of those arrested created a ruckus at the Malaviya Nagar police station and made serious allegations of corruption against them.

In a complaint, SMC’s Assistant Sub Inspector N.G. Sapar has stated that on a very specific information that a liquor den is run in Gokuldham Awas Yojana, a raid was conducted at various flats in the society.

Country liquor worth Rs three lakh, raw material and bottles besides 10,081 IMFL bottles were seized in the raid. In all, a total seizure of 38 lakh were made.

The case is being investigated by Police Sub Inspector M.S. Maheshwari.

It was not a smooth raid for the police team, as women members and youngsters first confronted them first.

After the raid was over, when bootleggers were taken to Malaviyanagar police station, family members of Hardik and other bootleggers ‘gheroed’ the police and tried to free the accused.

They were making bribery allegations. Some of the women also alleged that every month, a police team takes bribes to let them run the den.

A video clip in circulation shows a woman alleging that every month they pay hefty bribes to the police. While the women police persons collect Rs 2000-2000 per head, Rs 20,000 is paid to the vigilance. They give costliest IMFL bottle to the police officers.

Hardik can also be seen claiming that when a police person takes his family on tour to Diu, he pays Rs 20,000 bill for the trip and yet gets harassed with raids and arrest.

Will Nepal’s new government rechart its economic and foreign policies?