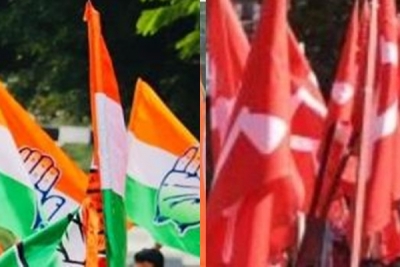 Agartala, Dec 28 (IANS) In a significant political development, leaders of both Congress and CPI-M on Wednesday indicated that they would forge an electoral alliance in the upcoming Tripura Assembly elections, expected to be held in February.

The CPI-M-led Left and the Congress formed an alliance for Assembly elections in West Bengal in 2016 and 2021.

Congress in-charge for Tripura Ajoy Kumar said that in the forthcoming Assembly elections, Congress would likely form alliance with the CPI-M so that the anti-BJP vote can be consolidated.

“We are here to fight the fascist forces and people of Tripura should fight for their rights,” he told the media adding that due to the “misgovernance” of the BJP-led alliance, people are fed up of with the saffron party.

Of late, Congress and CPI-M leaders were seen sharing the same dais while five Left parties, including CPI-M, and the Congress on Tuesday jointly appealed to the people to come forward cutting across political identity, religion, caste and community to raise united voice against this misrule of BJP and to make an end to “this black regime”.

About the possible electoral alliance with the Congress, CPI-M Tripura state Secretary Jitendra Chowdhury said that issuance of the joint statement on Tuesday is an indication about “our future political course of action”.

“There is no rule of law in Tripura and the Constitution failed during the last 58 months of BJP governance. A conducive atmosphere should be there before the coming Assembly elections. We have also urged the Election Commission to create the appropriate environment for the free and fair elections,” said Chowdhury, who is also a member of the CPI-M’s Central Committee.

Tuesday’s initiative (issuance of joint appeal) would be a turning point in the political history of Tripura and thanks to all political parties those signed in the joint statement, he said.

The CPI-M Politburo in a statement, issued in New Delhi, said that the Left parties and the Congress have jointly demanded the restoration of democracy and the reestablishment of the rule of law that is being destroyed by the BJP government’s “tyrannical rule”.

The Election Commission must take proactive measures to prevent the Assembly elections from being reduced as a farce. Democracy and democratic rights must be restored in Tripura fully, if there has to be a free and fair election, the statement said.

In another development, leaders of TIPRA (Tipraha Indigenous Progressive Regional Alliance) on Wednesday said that it is ready for an alliance with those parties who give their commitment and support to the demand for a separate tribal state – “Greater Tipraland”.

Senior TIPRA leader and Deputy Chief Executive Member of Tripura Tribal Areas Autonomous District Council Animesh Debbarma said: “We have only one agenda, that is ‘Greater Tipraland’ and constitutional solution for the Tiprasa (tribal) people living in the TTAADC area. Until this issue is resolved we are not going to form any type of alliance with anyone. We are also protesting against the violence unleashed by the BJP,” Debbarma said.

The TIPRA is now ruling the politically-important 30-member TTAADC, which has jurisdiction over two-third of Tripura’s 10,491 square km area and is home to over 12,16,000 people, of which around 84 per cent are tribals, making the autonomous council as a mini-assembly.

Reacting on the possible Congress-CPI-M alliance, Tripura Chief Minister Manik Saha said that it was known to all earlier but they have revealed it openly.

“Like West Bengal, the people of Tripura would reject them. In the Tribal autonomous body and urban local bodies’ elections, both the parties have performed poorly and it will be repeated in the coming Assembly polls,” Saha told the media.

WATCH: Saba Pataudi shares montage of memories on her ‘baby…

China, Nepal say Everest a bit higher than past measurements