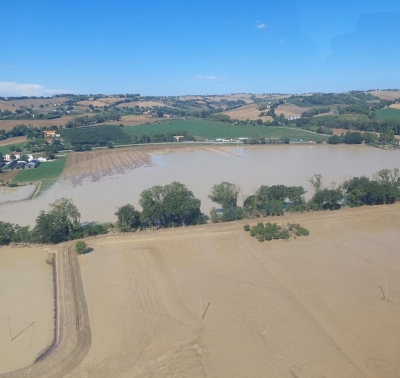 Rome, Nov 27 (IANS) At least one person died and several others went missing on the island of Ischia in southern Italy, after heavy rains triggered a landslide that hit several residential buildings, according to authorities and local media.

“So far, we can confirm one victim,” Italian news agency AGI cited Naples prefect Claudio Palomba as reporting on Saturday.

The prefect said the victim was believed to be a woman who resided permanently on the island.

The landslide occurred at around 5 a.m. local time, yet, rough sea conditions were making it hard for emergency boats and helicopters to manage intervention, Xinhua news agency reported.

Searching activities were ongoing, especially in Casamicciola Terme, one of the municipalities of Ischia. At least 10 buildings collapsed due to the landslide, according to local media.

As of late Saturday, nearly 80 people were evacuated to a local sports facility, but their number might rise, while dozens of families are still isolated and impossible to reach, ANSA news agency reported.

All rescue efforts were being coordinated by Civil Protection Department Chief Fabrizio Curcio from the prefecture of Naples, where local and national rescue agencies were involved in an ongoing emergency meeting. Italian Prime Minister Giorgia Meloni took part through a video-link in the emergency meeting in Naples, according to the local prefect.

Through social platforms and local media, Ischia Mayor Enzo Ferrandino has appealed to people on the island to remain indoors in order to facilitate rescue operations.

Ischia is a volcanic island lying in the Tyrrhenian Sea nearly 30 km from the southern city of Naples.

Test to reveal if your coffee is fake

“Pirates Of The Caribbean Is Primed For Rebooting With…