KJo avenges Farah’s dig at his fashion sense, says she has made ‘giant leaps’ 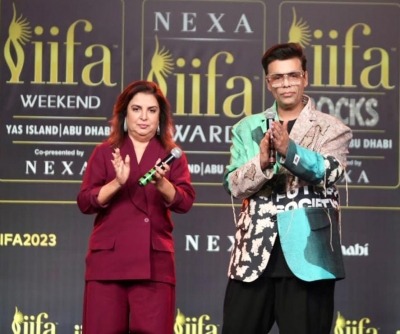 Mumbai, Nov 29 (IANS) Bollywood directors Farah Khan and Karan Johar are best of friends, so they do what best friends do – pulling each other’s legs.

An exhibit of the same was seen on Tuesday night at the International Indian Film Academy Awards (IIFA) media event in Mumbai.

The duo was on stage when both of them decided to bring their sassy sides out and diss each other in a fun banter in front of the media fraternity.

As it was revealed that the two will be the hosts for the ‘IIFA Rocks’ event, KJo told Farah in jest that she has an impeccable fashion sense and she has taken ‘giant leaps’ in the fashion arena.

Farah, known for her impromptu and slapstick brand of humour, gave it back to Karan, saying, “Did you prepare for this bit?”

To this, Karan responded, “I get paid to do this.”

Earlier on Tuesday, Farah took to her Instagram to share a reel in which she can be seen with Karan as she pokes fun at the very same dress that Karan wore at the IIFA media event.

The ‘Main Hoon Na’ helmer called Karan’s designer blaze “sofa ka kapda” in the video, which left Karan aghast and the fashion enthusiast in him die a little from inside.

The 23rd edition of IIFA will be held in collaboration with the Department of Culture and Tourism, Abu Dhabi, at the Etihad Arena, Yas Island, from February 9 through February 11, 2023.

Sharman in Indian adaptation of ‘Everybody Loves…

SC stays Bombay HC observation that those who feed stray…

In this pandemic-ravaged era, one of the prized ingredients…