Keeravani a ‘great fan’ of ‘Fiddler on the Roof’; inspired by Spielberg’s favourite composer 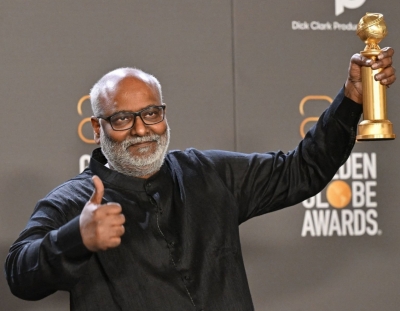 Los Angeles, Jan 11 (IANS) The ‘RRR’ Golden Globe-winning music composer, M.M. Keeravani, opened up on the musical influences that have shaped him throughout his career.

In a back-stage interaction with journalists just after he received his trophy, Keeravani, who’s also known as M.M. Kreem in Hindi movie credits, said he is a “great fan” of the 1971 musical film ‘Fiddler on the Roof’, the Colin Farrell-starrer ‘Phone Booth’ (2002) and the Eddie Murphy movie, ‘Coming to America’ (1988).

Colin Farrell, incidentally, won the Golden Globe for Best Actor (‘The Banshees of Inisherin’) and Eddie Murphy was honoured with the Cecil B. DeMille Award at the glittering event in Los Angeles.

“I am inspired by whatever happens in the world, especially in the West,” Keeravani said. “I have a list of movies that I watch religiously on a daily basis. Each and every movie I watch at least a hundred times,” he added, mentioning that he loves films with “musical content and emotions” because he feels “quite refreshed” after watching them.

With remarkable humility, he made it clear that his inspiration “comes from all the stalwarts from around the world, from the legendary John Williams, who has given music to almost all of ‘Star Wars’ films and Steven Spielberg’s movies, including ‘The Fabelmans’, which got the Best Film Golden Globe, to the Pakistani Sufi music maestro Nusrat Fateh Ali Khan.

“I am a student, I will be one forever,” declared Keeravani, who is ‘RRR’ maker S.S. Rajamouli’s cousin and believed to be the inspiration of the film’s sequel, which is said to be in the process of being written. “There is something to learn every day,” he added.

Talking about ‘Naatu Naatu’, which staved off challenges from Rihanna, Taylor Swift and Lady Gaga to win the Golden Globe for Original Score, Keeravani said “it is a song of celebration … it portrays stamina, energy and happiness … it is packed with ethnic beats and grooves.”

A no-fuss enunciation of a song that had Los Angeles dancing on the aisles of the city’s iconic TLC Chinese Theatre on the Hollywood Walk of Fame and then got India break into a national celebration.

Apple to increase App Store prices in UK, other countries on Feb 13

Dreams do come true: Chahal on completing 4 yrs in…