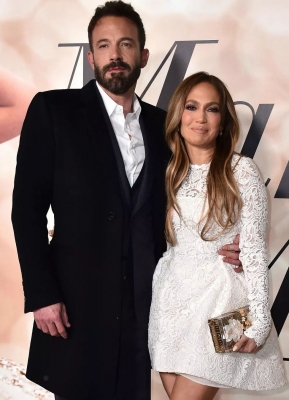 The 53-year-old singer added the move has made her “proud” and said it reaffirmed her feelings that she is in full control of her life, reports femalefirst.co.uk.

She made the statements in a cover interview with the December issue of Vogue magazine after she and Ben, 50, married in Las Vegas in July before throwing another wedding extravaganza that lasted three days at her new husband’s $8.9 million estate in Georgia.

Jennifer said: “People are still going to call me Jennifer Lopez. But my legal name will be Mrs Affleck because we’re joined together. We’re husband and wife. I’m proud of that.

“I don’t think that’s a problem… it’s not traditional. It doesn’t have any romance to it. It feels like it’s a power move, you know what I mean?

“I’m very much in control of my own life and destiny and feel empowered as a woman and as a person. I can understand that people have their feelings about it, and that’s okay, too.”

“But if you want to know how I feel about it, I just feel like it’s romantic. It still carries tradition and romance to me, and maybe I’m just that kind of girl.”

Jennifer and Ben, fondly called as Bennifer, first dated between 2002 and 2004, with the pair marrying other partners during their subsequent two-decade break.

Jennifer added to Vogue about her and Ben’s initial romance: “We were so young and so in love at that time, really very carefree, with no kids, no attachments. And we were just living our lives, being happy and out there. It didn’t feel like we needed to hide from anybody or be real discreet.”

“We were just living out loud, and it turned out to really bite us. There was a lot underneath the surface there, people not wanting us to be together, people thinking I wasn’t the right person for him. I became very guarded because I realised that they will fillet you. I really wish I could say more. I used to be like that. I am like that. But I’ve also learned.”

FIFA World Cup Group B preview: England favourites, but rivals could cause upsets

Hasaranga displaces Rashid at the top of bowling rankings; Surya continues to lead the batters

Afghan national among 4 arrested, 354 kg heroin worth over…