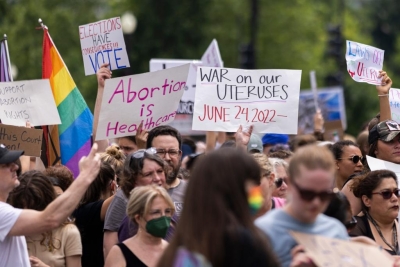 <br>How these priorities match the voters’ concerns will be revealed when they vote on November 8.

For 85 per cent of Americans in a recent Gallup poll, the inflation-ravaged economy was extremely or very important, and 71 per cent gave crime the same ranking while only 66 per cent ranked abortion similarly.

The Democrat majorities hang by a thread in the 435-member House where a loss of five seats could give Republicans the control, and in the equally balanced 100-member Senate where they depend on Vice President Kamala Harris’s tie-breaking vote.

In fact, while Biden won the presidency in 2020, the Democrats lost 13 House seats.

Thirty-six governorships and scores of state and local offices are also on the ballot.

The Republicans are trying to capitalise on the voters’ preoccupation with the economy and crime and Democrats, who initially prioritise abortion rights, have lately been trying to pivot to them.

The inflation was officially at 8.2 per cent in September, although prices of some everyday products like petrol shot up by over 40 per cent and food by 12 per cent this year.

Inflation has had the collateral effect of raising interest rates which is threatening a recession.

The economic problems are not entirely the fault of the Democrats given the lingering effects of the Covid pandemic, the Russian invasion of Ukraine and OPEC raising oil prices.

In fact, the roaring inflation is the result of Biden’s good intentions gone awry — the $1.9 trillion American Rescue Plan in March to help individual Americans and state and local institutions suffering from the aftermath of the pandemic which included payments of $1,400 to everyone legally in the US, and other measures that increased government spending.

Some economists like former President Barack Obama’s economic adviser Larry Summers had warned about the inflation dangers from Biden’s programmes.

Paradoxically, the economic recovery as measured by employment continues apace with the lowest jobless rate of 3.5 per cent and that itself is being blamed for the inflation robbing the Democrats of bragging rights.

But it is payback time for the Republicans after the Democrats used the Covid pandemic originating in China to hammer Trump and disregard his vaccine programme that had it ready for deployment when Biden took over.

When the Supreme Court rescinded in June its earlier decision that made abortions legal all over the country and ruled that states can legislate their own laws on abortion, there were protests nationally.

The Democratic Party, whose agenda is set mostly by college-educated, economically better-off liberals, made abortion the focal point of the election strategy leaving the economic and crime issues for the Republicans to exploit

Democrats have been scrambling later in the game to catch up on the other issues and its leadership has faced internal criticism.

Senator Bernie Sanders, a former contender for the Democratic Party presidential nomination, wrote in an op-ed in The Guardian: “While the abortion issue must remain on the front burner, it would be political malpractice for Democrats to ignore the state of the economy and allow Republican lies and distortions to go unanswered.”

Democrats should be challenging the Republicans on economic issues like minimum wages that matter to the working-class Americans and on which they can be vulnerable, he suggested.

Criticising what he called “intellectualisation based on polling”, California’s Democratic Governor Gavin Newsom told CBS: “We’re getting crushed on narrative. We’re going to have to do better in terms of getting on the offence and stop being on the damn defence.”

Threats to democracy from what the Democrats say is Trump’s refusal to accept his defeat leading to the January 6, 2021 riots and his scorch-earth rhetoric adding to a climate of violence is the other important plank of their platform

The recent attack on Speaker Nancy Pelosi’s husband Paul has cast the shadow of violence over the election, while also drawing attention to the immigration issue as the attacker was a Canadian living illegally in the US.

But the Republican candidate for New York governor, Lee Zeldin, has also been attacked while campaigning and Supreme Court Justice Brett Kavanaugh, a Trump nominee, came close to being attacked by an armed man unhappy with the way he expected him to vote on the abortion issue.

The other side of the violence issue is the fear of crime — a fallout of the Democrat-led protests against police brutality in 2020 that degenerated into rioting and looting around the country — and the Republicans have been capitalising on it.

FBI statistics showed a dramatic increase of 30 per cent in murders from 2019 to 2020, and although the rate of increase moderated to 4.3 per cent last year, the cumulative impact is daunting, fuelling the Republican campaigns.

The proliferation of plain, criminal violence was also brought home by another incident involving Zeldin: A gang shooting outside his home in a New York suburb that sent his young daughters scrambling for cover.

Some prominent Democrats had called for cutting police budgets or doing away with police departments and even though Biden and others have renounced these policies and even provided more funding for police, these have been used to tar all members of the party.

The protests also led to passing laws in states like New York that made it difficult to hold violent criminals in custody and to the rise of liberal prosecutors.

The party elite propelled these ideas from their safe locations, while crime directly made others feel vulnerable and hit the poor and the minorities in unsafe neighbourhoods the hardest.

The Democratic Party establishment missed the writing on the wall by ultra-liberal San Francisco that voted in June to strip the lenient public prosecutor of her job amid spiralling crime.

Even in staunchly liberal states like Oregon and New York that have shut out Republicans from governorships, Democrats are facing tight races because of the law and order issue.

Democrats have gone on the offensive on crime by blaming the Republicans for the lax gun laws that they support.

The threat to democracy has turned out to be more of an abstract concept for most voters compared to concrete issues like inflation.

Immigration is another issue that the Republicans are capitalising on with a Gallup poll showing that 63 per cent of Americans consider it extremely or very important.

Border patrol encountered more than 2 million illegal immigrants this year till September and an untold number had slipped by them.

After a policy that virtually opened borders to some wanting to enter the US and reversing Trump era restrictions that the Democrats had criticised, Biden last month resurrected the rule requiring those seeking asylum to remain in Mexico when overburdened Republican border states and even a Democratic city began shipping the migrants to Democrat-run cities.

Foreign policy has not figured that much in the campaigns given the citizens’ focus on the economy and crime, as well as concerns about abortion laws.

Russia’s invasion of Ukraine has been subsumed by the economy where the fallout directly impacts voters.

Fighting climate change, which Biden has trumpeted as one of his prime concerns, is considered extremely or very important by only 45 per cent of those Gallup polled and hardly figures in the campaign, and negatively, if at all, because of the petrol prices.

Now Biden is himself trying to get OPEC to increase its oil exports because the rising petrol price is hurting his party – even if higher prices could cut consumption and going by earlier claims help fight climate change.

Durga Puja grant to be used for improving police-public…

Our ‘fabulous five’ can overcome pink-ball…

Dinesh Karthik promises to ‘give it all’ as KKR…

Mukesh Khanna Claims Shaktimaan ‘Is The Biggest Superhero In…

Diego Maradona defined reality with his left hand and left…