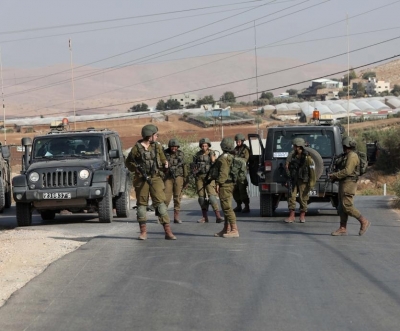 Jerusalem, Dec 9 (IANS) Israeli soldiers shot dead three Palestinian men in the occupied West Bank during a raid, official Palestinian and Israeli sources said, as the violence in the region has been escalating this year.

The three were shot in the Jenin area in the northern West Bank during a raid to arrest suspects in “terrorist activity,” the Israeli military said in a statement on Thursday.

The soldiers fired back after “being targeted with direct fire,” it added.

No injuries were reported among the Israeli forces, Xinhua news agency reported.

The official Palestinian news agency WAFA reported that after the killing, “fierce clashes” broke out between local Palestinians and Israeli soldiers, in which 10 more Palestinians were wounded.

Jenin and its refugee camp have been a focal point of nightly raids, which often trigger violent clashes. Israel says the raids, which have been carried out almost daily throughout the West Bank, aim at arresting suspects in a string of attacks against Israelis.

Since January, more than 200 Palestinians, including 50 in the Gaza Strip, have been killed by Israel, according to official Palestinian statistics.

Israel seized the West Bank, the Gaza Strip, and East Jerusalem in the 1967 Middle East war and has controlled or besieged them ever since, while the Palestinians seek to establish an independent state on these territories with East Jerusalem as the capital.

UP beat Punjab in PWL tie