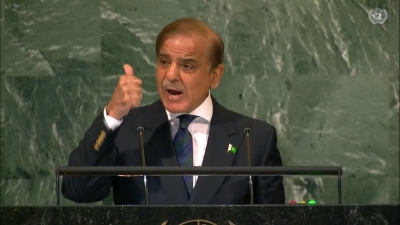 The Prime Minister lashed out at Khan for accusing him and the senior military official of orchestrating the failed assassination bid on him during PTI’s long march in Gujranwala on Thursday, saying India is using his statement to target Pakistan’s institutions, Express Tribune reported.

“What else would an enemy country like India want? They are celebrating today. India’s TV channels are excited to see Khan speak ill about the ISI and military institutions as [the PTI chief] is levelling severe allegations against them that one couldn’t even think about,” Sharif said, deeming Khan an “idol of lies – from tip to toe”, Geo News reported.

The Prime Minister also said that Khan is damaging the country through his “false and cheap conspiracies”, adding that he is also building negative narratives against state institutions.

During the presser, a video was shown to the journalists which had a compilation of Khan’s clips since 2011 where he can be heard speaking about the army and military officials.

The premier maintained that if Khan successfully shows evidence to the people that he was behind the attack, then “I don’t have a right to continue to hold the Prime Minister’s office”.

Union Budget to usher in new era of growth and development for J&K, says BJP leader

Euphoria Fame Jacob Elordi To Be Next Superman Post Henry…

Saba Pataudi shares a gem from the memory trunk with Soha…