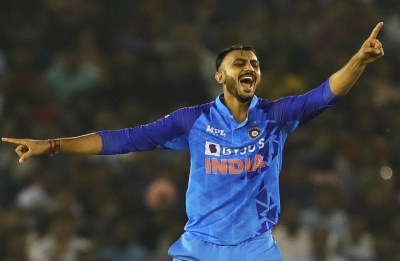 Rajkot, Jan 8 (IANS) India spin all-rounder Axar Patel, who produced impressive performances throughout the three-match series against Sri Lanka, especially with the bat, credited Hardik Pandya for his success in batting, saying that the skipper tells him to play freely and is there to protect as well.

Suryakumar’s blistering unbeaten century (112 not out off 51 balls) and a collective dominating performance by bowlers powered India to an impressive 2-1 series win over Sri Lanka with a convincing 91 run-win over in the third and final T20I at the Saurashtra Cricket Association Stadium, here on Saturday.

The 28-year-old Patel got the Player of the Series Award for scoring 117 runs and picking three wickets in the series. He placed two unbeaten knocks in the series, especially his crucial fifty in the second T20I was pretty impressive.

“Feel happier when the team benefits from my batting (when compared to bowling). Didn’t do anything different for this series, just that the captain gave me a lot of confidence in the dugout. He tells me to play freely and tells me that he is there to protect me,” said Axar in the post-match presentation.

“We do a lot of planning during team meetings but sometimes things do go wrong and I just focus on doing my plans properly,” he added.

Skipper Hardik also praised Axar, saying that he is proud of the all-rounder and his performance will give a lot of confidence to the team.

“I’m really proud of him (Axar), the way he is batting down the order and hitting. This will give a lot of confidence to him and the team as well. My motto in life as captain has been that I’ll back my players,” said Pandya.

“These are the best T20 cricketers in India and that’s why they are here. There is no space for doubting in this format and we’re backing the players properly. The way we played in the series was pleasing, we didn’t even play 50 per cent of our game in the second game but we still fought well,” he added.