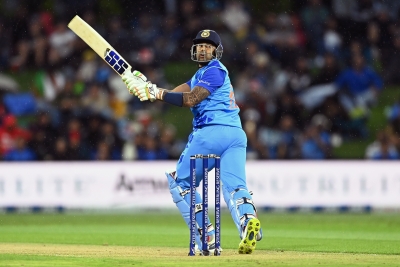 Rajkot, Jan 7 (IANS) After scoring a match and series-winning century in the third T20I, Suryakumar Yadav on Saturday revealed his success mantra in the shortest format of the game, saying that it’s important to put pressure on yourself during the practice session, which makes situation a bit easy during the game time.

Suryakumar blistering unbeaten century (112 not out off 51 balls) and a collective dominating performance by bowlers powered India to an impressive 2-1 series win over Sri Lanka with a convincing 91 run-win over in the third and final T20I at the Saurashtra Cricket Association Stadium, here.

With his beautiful wristy shots, the right-hander made the opponent team feel like he isn’t from the same planet, treating every bowler with disdain. However, it’s not easy and a lot of hard work goes on in the preparation for a game, according to the star cricketer.

“It’s really important to put pressure on yourself when you are preparing for a game. If you do that in practice, it gets a little easier while playing the game. There is a lot of hard work involved but it’s about doing quality practice sessions. You should know what your game is and prepare accordingly,” said Suryakumar in the post-match presentation.

The stylish batter also spoke about his shot selections during a game.

“Boundaries behind are like 50-60 meters, so I was targeting them. There are some shots that are pre-determined but you need to have other shots too so that if the bowler changes his plan, you can have an answer,” he said.

Asked about the head coach Rahul Dravid’s advice for him, Suryakumar said,” He (Dravid) just lets me enjoy and tells me to express myself.

Skipper Hardik Pandya also praised Surya, saying that the batter has been surprising everyone with his every innings.

“I think he (SKY) has been surprising everyone every innings that he is batting. He is just telling us that batting is so easy. If I were bowling to him, I’d be disheartened on seeing his batting,” said Pandya.

Lawyer held in Goa for committing theft in court

US set for more military buildup near China

‘You said we would play tennis together one…

Elgin man who sexually assaulted, killed toddler to be freed…