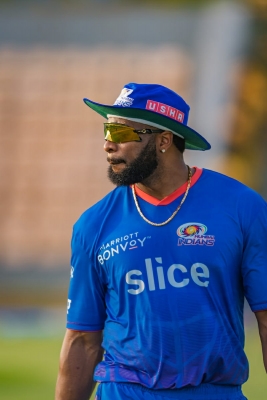 Mumbai, Jan 7 (IANS) Since he landed on Indian shores in 2010 to don the Mumbai Indians jersey, Kieron Pollard has been an aggressive force against the bowlers in the Indian Premier League (IPL). Indian star Suryakumar Yadav express his thoughts about Pollards leadership during his interaction with MI TV.

Over the years, the powerful West Indies all-rounder played a starring role in making Mumbai Indians one of the most dominant teams in the IPL. In that period, the Mumbai Indians went on to win 5 IPL titles in 13 years — two of them in consecutive seasons.

Now, the Trinidad-born will take those same qualities to lead the MI Emirates in the inaugural edition of the ILT20.

Surya Kumar Yadav, a star batsman in the Mumbai Indians line-up, is excited at the prospect of watching his teammate destroy bowling attacks in the fledgling tournament in UAE.

During his interaction with MI TV, the Team India star expressed his thoughts about Pollard’s leadership and his impending stint in the ILT20.

SKY is confident that the qualities that made Kieron Pollard a success in the IPL will stand him in good stead in the ILT20 as well.

“I feel as a leader Pollard has been very calm, composed and gives everyone a chance to express themselves on the field whether the team is under the pump or even if we are on top.” Suryakumar further added, “We felt very comfortable when he led MI and I am sure he will do the same thing for the MI Emirates,” he said.

The debut season of the ILT20 will be played from January 13 to February 12, 2023. MI Emirates will open their campaign in Abu Dhabi against Sharjah Warriors on January 14.